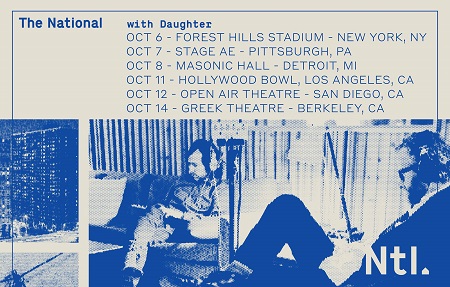 The National and Daughter will team up for a string of live dates in October. The first show will take place at Forest Hills Stadium in New York on October 6th and will wrap on October 14th & 15th at the Greek Theatre in Berkeley, CA.  A complete list of dates can be found below.

The National released their seventh studio album, Sleep Well Beast, on September 8, 2017. The new effort was a #1 album in the United Kingdom and Canada and reached #2 on the Billboard 200 chart in the United States.

Daughter just released their original score for ‘Life is Strange: Before the Storm,’ an episodic graphic adventure video game developed by Deck Nine. Titled Music from Before the Storm, the soundtrack was released on September 1, 2017.