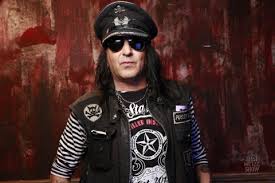 UPDATE: On with the Show: Faster Pussycat were forced to play the M3 Festival without vocalist Taime Downe (doctors would not release him from the hospital due to his pneumonia). Faster Pussycat drummer Chad Stewart handled vocal duties, but later received some help from Jason McMaster (Dangerous Toys), Share Pederson (Vixen) and Ted Poley (Danger Danger). Footage of their M3 performance can be viewed below.

UPDATE: (04/28/17) Taime is still in the hospital and according to the message below, it is still unclear if the band will be able to make it to their performance at the M3 Festival today. We will post more updates as they come in.

Hey gang, Taime is still currently in the hospital, suffering from a very severe case of pneumonia. I’m unsure of where that leaves our performance for today at M3; however, his health is our main concern. We ask that you leave any well wishes here on this thread, rather than direct messages, emails, etc. – just know he is on the mend currently. Thank you for understanding. -Ace”

Original story from 04/27/17
Faster Pussycat postponed tonight’s concert in Cattivo, PA due to vocalist Taime Downe being hospitalized for a “severe case of pneumonia”. According to a Tweet, just moments ago, the band is still expecting to perform tomorrow at the M3 Festival.

This is not the first time the singer has had to go to the hospital when his band was on the road.  While touring in 2014, he initially went to the hospital for an on-going tooth issue, but after a routine check of Downe’s blood pressure the doctor became alarmed and would not release the singer until it stabilized.


Want to thank everyone for the get wells! I'm on the mend, but it's a long road. And NO, it's… https://t.co/zyIOVSVqMj

Home. Checking out for a bit. Thanks for the concerns. Taime is doing much better, for those who asked. Cheers-

Thank you all for the support this week! ???

FYI: Tonights show at Cattivo in PA is being postponed until this summer, as Taime is currently in urgent care. Sorry for any inconvenience.

Thanks all. Taime is currently still in the hospital. However; He is expected to be able to perform tomorrow at M3, according to the Dr. FYI