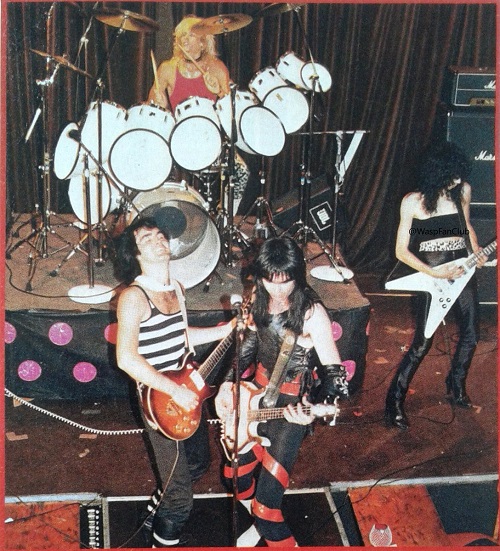 full in bloom: How did you meet Blackie Lawless?

Lizzie Grey:  When I was in my late teens hanging out in Hollywood at the Starwood and the Rainbow, I used to see him around. You couldn’t miss him in his Elvira get-up while the rest of the city was sparkling glitter and glammed out to the max. The chicks all used to make fun of him, but I still thought he was cool, and eventually chatted him up a few times about rock and roll. It was around 1977 that we started working on Sister (evolved into W.A.S.P.) together. 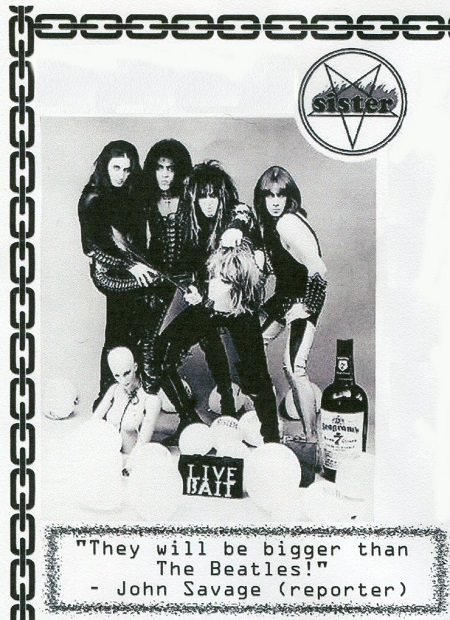 full in bloom: What were some of the ideas Nikki Sixx adapted from Sister to later use in Motley Crue?

Lizzie Grey:  Well, you know, that’s the funny part. Once Nikki started making a big noise with Motley Crue, he suddenly threw away all the glitter/glam imagery that had made him so popular in Hollywood with the London band, and outfitted Motley Crue and their stage exactly like the old Sister band photos…right down to the skulls on spikes, pentagrams, and flame pots. I guess Blackie really messed with Nikki’s mind when he fired him, and this was Nikki’s way of doing an ego “checkmate” on him.

full in bloom: How did you meet Nikki?

Lizzie Grey:  Blackie ran an ad in the Recycler for a bass player as we struggled to put Sister together, and low and behold, Frank Feranna (Nikki Sixx), newly imported from Seattle, showed up at Blackie’s place with girlfriend Angie Saxon in tow. She wouldn’t shut up and he was pretty quiet throughout the whole ordeal. She kept telling us what Frank was and wasn’t willing to do in a band and basically treating us like we were auditioning for her. Blackie didn’t like him or her on sight, but I thought he looked like John Waite from The Babys and had star potential. I convinced Blackie that we should give him a go. Soon thereafter, Frank and I were good friends.

full in bloom: What are three fond memories from your days in Sister?

full in bloom: After Sister, you formed the first version of London with Nikki. What made you leave Blackie to form a new band?

Lizzie Grey:  Creative differences. My 70’s glitter influences got the best of me, and I came to the realization that I wanted to write and perform upbeat pop melodies in the vein of Sweet and Mott the Hoople more than I wanted to be a part of pseudo-Alice Cooper dirge performance.

Make sure to read our recent full in bloom interview with London / Spider and Snakes Guitarist Lizzie Grey.

Sister “Don’t Know What I Am”