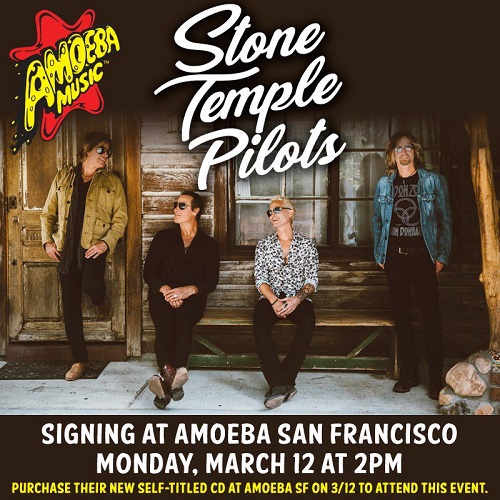 Stone Temple Pilots will be stopping by Amoeba San Francisco for a special in-store signing session on Monday, March 12th at 2PM.
Attendees will be able to purchase the band’s new self-titled CD before its official release date (3/16).  Get it signed at the event, say hi to new STP singer Jeff Gutt, and listen to the album before the band’s sold-out show at The Fillmore later that night.

Stone Temple Pilots will release their highly anticipated self-titled album on March 16th, marking the band’s first album with new lead singer, Jeff Gutt.  Despite being one of the best-selling bands of the ’90s with platinum records and a Grammy to its credit, guitarist Dean DeLeo says, “This new incarnation of STP is focused on what lies ahead.  The best way for us to honor our past is to build on it and keep making new music.”  The first single, “Meadow,” has been embedded below.