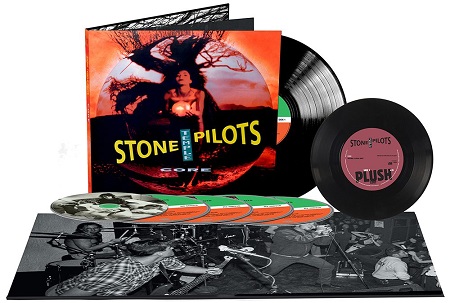 “Only Dying,” a previously unreleased song by Stone Temple Pilots, can be heard below. The track will appear on the upcoming CORE: SUPER DELUXE EDITION box set, available worldwide on September 29th via Rhino Records. “Only Dying” was originally intended to be included on The Crow (1994) soundtrack, but following an on-set accident that killed the movie’s lead character, Brandon Lee (Bruce Lee’s son), the song was deemed inappropriate.

The CORE: SUPER DELUXE EDITION box set includes four CDs featuring a newly remastered version of the original album, plus more than two hours of unreleased demos and live performances, including the band’s performance on MTV Unplugged. Also included is the original album on 180-gram vinyl and a DVD that contains a 5.1 Surround Sound Mix of the album along with videos for the album’s four singles. The set, limited to 15,000 copies worldwide, comes packaged in a richly detailed hardcover book (12 x 12) with rare and unseen photographs.