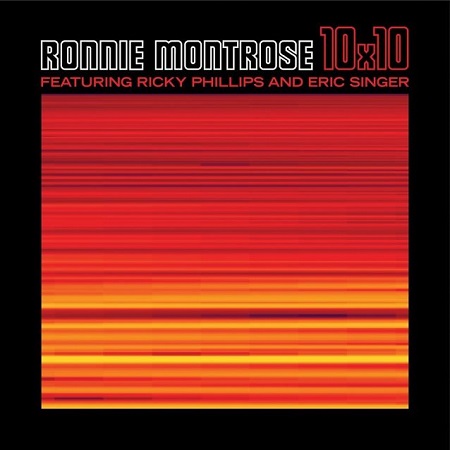 “Color Blind,” the new song from Ronnie Montrose’s posthumous 10×10 album, can be heard below. The track features vocals by Sammy Hagar and Toto guitarist Steve Lukather. Prior to a successful solo career and his stint fronting Van Halen, Hagar got his start singing with Montrose. Between 1973-75, he recorded two influential albums, the self-titled debut and Paper Money. “It’s valuable to have 10X10 be seen as Ronnie’s last work, rather than going and digging up some stuff from his past. This was something he truly had a vision for,” says Hagar.

Ronnie Montrose began recording an ambitious passion project with bassist Ricky Phillips (Styx, Bad English) and drummer Eric Singer (Kiss, Alice Cooper). The idea was to record 10 songs with 10 different singers and call the album 10X10. Sadly, Montrose was unable to see the album through, due to his death on March 3, 2012. Instead, Phillips made it his mission to finish the songs by enlisting a small army of Ronnie’s musician friends to record the vocals and the guitar solos for each song, completing the album in recent years.

Phillips says the songs represent some of Montrose’s best work. “His songs still have the fire and angst of a young rebel, but with some added wisdom and foresight voiced in his own unique language of ‘guitar-speak.’ On 10X10, we hear Ronnie at the top of his game, from the opening crunch guitar of “Heavy Traffic,” all the way to the closing song, “I’m Not Lying,” which was Ronnie’s tip of the hat to his friend Robin Trower.”

Previous: Noel Gallagher on Jools Holland BBC2 Two
Next: Lucy Rose, “I’ve never been happier on the road than I am right now!” – UK/Ireland 2017 Tour Update