Sammy Hagar on His Relationship with Michael Anthony: “Back in the early Van Halen days, Eddie would get all jealous” – 2022 – INTERVIEW

Guitar World: Sammy Hagar on his all-time favorite Van Halen album, and why Michael Anthony’s bass playing is better than ever on The Circle’s new album, Crazy Times. 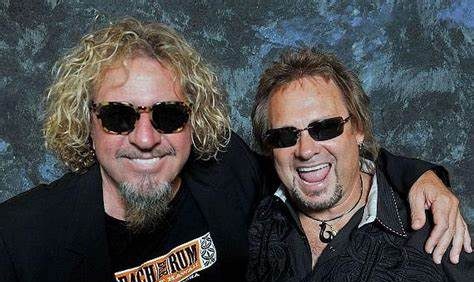 Many would attest to the musical chemistry of Van Halen. But I would wager what you share in The Circle rivals that. 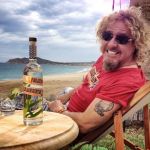 “Oh, for sure. The chemistry in The Circle is unique because we all grew up on the same music. When one of us brings up a song like Won’t Get Fooled Again, we all know what we’re talking about. We don’t have to explain anything, and we don’t have to argue. We all carry the same reference points, which helps us stay on the same page.

“But as far as rivaling Van Halen, I cannot drive this point home enough: Jason Bonham plays exactly like his dad. I never played with his dad, but I’ve seen Led Zeppelin so many times, and Jason has the goods. When Jason plays, you close your eyes, and you’re hearing his pop play.

“And Alex Van Halen: all he ever wanted was the John Bonham drum sound. With every producer, Alex would say, ‘I want my drums to sound like When the Levee Breaks. I want to sound like Bonham.’

“So, you’ve got Jason Bonham on drums, and then you’ve got Michael Anthony, who plays better now than he ever played in Van Halen, and you’ve got Vic Johnson, who is an absolute maestro on guitar.”

Why do you feel that Michael plays better now than with Van Halen?

“Because in Van Halen, Eddie was so busy with the way he played guitar that there wasn’t much room for Mikey to do anything. Eddie played lead, rhythm, melody, and in some ways, the bass line all at once because he was just a master.

“So, Mikey rarely got to stretch out, but the truth is that he’s up there with John Paul Jones, John Entwistle, Geddy Lee, and Jack Bruce, but he never got to show it with Van Halen. But now, we’ve got Mikey off the leash, so we get more from him than we ever got when he was in Van Halen.”

How do you measure the importance of Michael Anthony on you personally and musically?

“Mikey is like my brother from another mother. So much so that back in the early Van Halen days, Eddie would get all jealous. Because Mike and I would get into these soulful conversations for hours, and Eddie would be on the outside looking in.

“And this was when we were all getting along great, not towards the end when our marriage fell apart. But even in the early days, Eddie would say, ‘Hey, I wanna hang out like you and Mike do.’ And I was like, ‘Cool, man. Let’s do it. So, what’s the problem?’

“The way it was in Van Halen was Eddie and Alex would get together and do their family thing. And Mike and I would always be the ones that would get tacos and margaritas and talk about life when we were on the road. And in the end, when we were arguing, and Van Halen was falling apart, me and Mike had our own plane because they were trying to keep Eddie and me apart.

“I guess Mike and I are cut from the same cloth. Eddie hated it, would get mad on stage, and called it stupid, but we had our inside lingo and were always very close.

“And that’s accented by the magical sound of his background vocals layered over my lead vocals. It’s a unique sound that can’t be described and that I’ve never had with anyone else.”