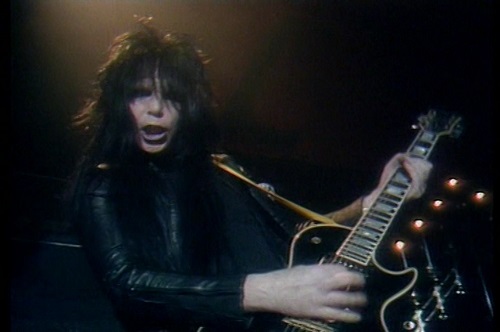 Former Mötley Crüe guitarist Mick Mars recently spoke to Guitar World about his guitar collection.  A few excerpts have been posted below.

“I’ve gone through a lot of ups and downs over the years,” Mars explains. “The ’72 Les Paul Custom that I used to play in the early days is now hanging in a Hard Rock Café somewhere in Florida. I didn’t want to let go of that guitar, but I was forced to do it. I don’t miss the pointy guitars. They all sounded really bad to me, and I hated all of them. They just didn’t work for me. Companies kept giving me all of these different guitars to try, and I would end up trying to break them. Now they’re all either kindling or I sold them off long ago.”

When Mötley Crüe hit a rough patch during the late Nineties, Mars was forced to sell off many of his prized vintage guitars.

“I’ve slowly and carefully rebuilt my collection,” he says. “I got really serious about collecting guitars again about 10 or 12 years ago. I now have about 100 guitars. I managed to keep some really cool instruments, but I like to have a lot of different things to play around with, so I’m always adding something new to my collection.

“I have guitars from the Fifties and Sixties as well as a few Seventies guitars. Some are really cool, and some are my player guitars. I don’t have very many guitars that I don’t play much. Even if I don’t take a particular guitar on tour because it’s too valuable and difficult to replace, it usually gets played in the studio.

“In the studio I go for a lot of different tones,” he explains. “I never record an album using just one guitar and one amp. Sometimes I’ll start a track with a stock Strat and do overdubs with something funky, like an old Harmony. I like to put something that sounds trashy behind something that sounds really good. That makes the track jump. I’ll use just about any guitar you can imagine in the studio. It’s all about what you do with the different tones and how you mix and match them.”

Although the Strat remains Mars’ favorite guitar, he also has a soft spot for Telecasters. Old-school Mötley Crüe fans may remember the Telecaster-shaped Kramers that Mars played on tour during the mid Eighties. “That was a transitional guitar for me,” he recalls. “Nobody was playing Teles back then, so that inspired me to play one. The problem with those Kramers is that they were really heavy. I loved the way they looked, though.”

View Mick’s guitar collection and read the entire interview at this location.