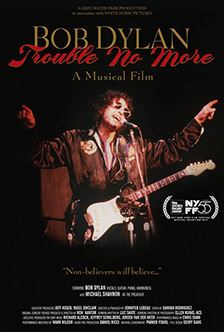 There will be an exclusive screening of the Bob Dylan film Trouble No More tomorrow, November 2nd at Landmark’s Kendall Square Cinema in Boston.

Like every other episode in the life of Bob Dylan, the gospel period, which began with the release of Slow Train Coming (1979) and supposedly ended with Shot of Love (1981), has been endlessly scrutinized in the press. As a result, much less attention has been paid to the magnificent music he made during that time. Trouble No More consists of truly electrifying video footage, much of it thought to have been lost for years and all newly restored, shot at shows in Toronto and Buffalo on the last leg of the ’79-’80 tour (with an amazing band: Muscle Shoals veteran Spooner Oldham and Terry Young on keyboards, Little Feat’s Fred Tackett on guitar, Tim Drummond on bass, the legendary Jim Keltner on drums and Clydie King, Gwen Evans, Mona Lisa Young, Regina McCrary and Mary Elizabeth Bridges on vocals) interspersed with sermons written by Luc Sante and beautifully delivered by Michael Shannon. More than just a record of some concerts, Trouble No More is a total experience.