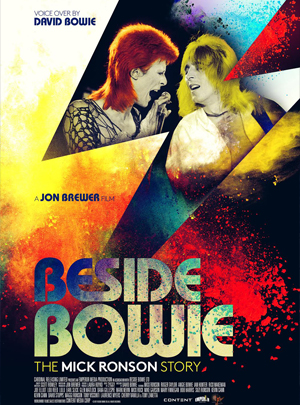 Beside Bowie: The Mick Ronson Story

English guitarist, songwriter, multi-instrumentalist, arranger, and producer Mick Ronson is the focus of a new documentary called Beside Bowie: The Mick Ronson Story. The official trailer can be viewed below.

From his humble beginnings working for Hull City Council to a career in the spotlight, playing alongside David Bowie and taking his place in the Rock Hall of Fame.

Beside Bowie will provide insight into the life and career-long associations of Mick Ronson, who played most famously with with David Bowie (with whom Ronson played guitar on The Man Who Sold The World, Hunky Dory, The Rise Fall of Ziggy Stardust and The Spiders From Mars, and Aladdin Sane), as well as other greats including Ian Hunter (Mott The Hoople), Morrissey, Lulu and Lou Reed, as well as a sideman in touring bands with Van Morrison and Bob Dylan.

Working closely with members of Ronson’s family, Jon Brewer continues his tradition of intimate access and authenticity in chronicling the life and works of this man, a cornerstone of Rock.