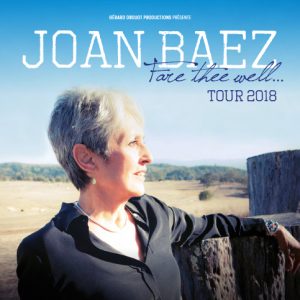 Singer-songwriter and Rock & Roll Hall of Fame inductee Joan Baez just announced a string of UK tour dates set to launch in March 2018. The tour will coincide with a new studio album from the folk singer called Whistle Down The Wind. The new effort was produced by Joe Henry (Bonnie Raitt, Elvis Costello, Ani DiFranco) and is slated for an early March 2018 release via Proper Records. It will be the first new record from Baez since 2008’s Day After Tomorrow.

About the album and tour, Baez says: “While 2018 will be my last year of formal extended touring, I’m looking forward to being on the road with a beautiful new album about which I am truly proud. I welcome the opportunity to share this new music as well as longtime favorites with my audiences around the world.”