Annihilator’s Jeff Waters, “the new ANNIHILATOR cd will be one of the best”, Juno Award 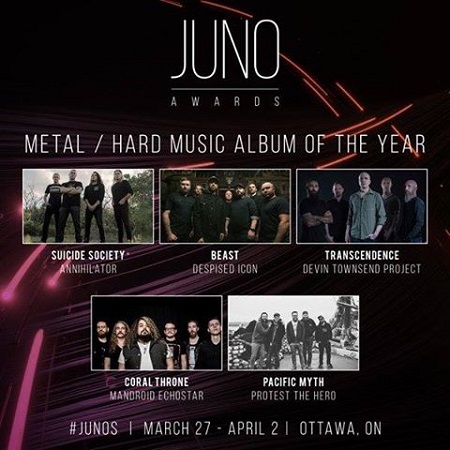 Canadian thrash kings Annihilator will possibly win a Juno Award for Best Metal / Hard Music Album of the Year for their 2015 effort Suicide Society.  The Juno Awards (Canada’s version of the Grammy Awards) run from March 27 through April 2nd and according to the message below, Annihilator frontman Jeff Waters was asked to walk the red carpet.  Jeff posted the following message today:

“The Junos in Ottawa this week: I was asked to walk the “Red Carpet” but politely declined… must be my “true metal” roots! But “Yay” for the nomination… this is Canada’s version of The Grammy Awards so here it is a big deal 🙂 On a more-usual and welcome note, the morning after the Juno Awards here, I jump on a plane (never done that before haha!) and go to my second home of Germany… come out and see me doing a guitar show at Frankfurt’s MUSIKMESSE…. I’m there all week! 🙂 Oh… and if you read this far, quote me on this: the new ANNIHILATOR cd coming up will be one of the best the band has ever done… most of you know that I NEVER say that. It’s either old age talking or we are all in for a killer record. METAL to all!”