Squeeze Box: The Complete Works of “Weird Al” Yankovic, a career-spanning box set of all fourteen of Al’s studio albums, remastered for CD and 150-gram vinyl, and lavishly housed in an exact replica of the artist’s signature accordion.

In addition to his studio albums, Squeeze Box will also include a special 15th bonus album, Medium Rarities, featuring previously unreleased and non-album tracks selected by Weird Al, plus a 100-page book including a treasure trove of unseen photos and memorabilia.

Squeeze Box will be officially released November 24, 2017, with a long-lead manufacturing time due to its unprecedented custom packaging. Fans have the opportunity to pre-order the box set now to be guaranteed delivery of this historic set, as only a limited number of sets will be manufactured after this pre-sale.

Fans who pre-order here will also gain access to a private section of this site (via the “Access Pass”), where they will be able to enjoy exclusive videos of how Squeeze Box was created and made, factoids of Al’s career, and special video greetings from the master himself.

The box set is available to order through PledgeMusic until February 28, 2017, at this location. 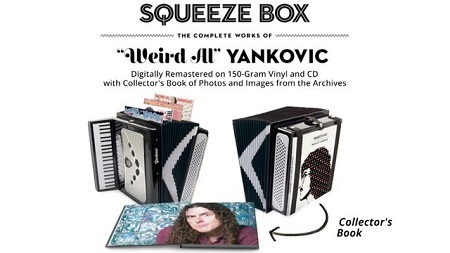