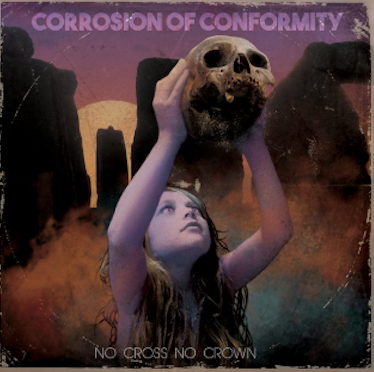 Corrosion of Conformity will release a brand new album called No Cross No Crown on January 12, 2018 via Nuclear Blast Records. The first single, “Cast The First Stone,” has been embedded below.

Recording in North Carolina with Grammy-nominated producer John Custer, the band cut the album in about forty days over the course of a year. “We took our time and didn’t put any pressure on ourselves,” says frontman/guitarist Pepper Keenan. “I’d go up from New Orleans and we’d do four or five days at a time, just hacking away at it. It was fun because we did it like a demo, but in a studio. We were writing and putting it on tape at the same time. We took what parts we thought were great from the old days and weren’t scared to go backwards. It kinda wrote itself that way.”

The album’s iconic title comes from a recent tour stop in England. “We were playing this old church from like the 1500s that had been turned into a performing arts center,” Keenan recalls. “The dressing room had stained glass windows and one of them showed this poor fella being persecuted. Underneath it said, ‘No cross no crown.’ So I just took that idea. We’re not trying to be on a soapbox, but we used it as a catalyst to write songs around.”

Which is to say that No Cross No Crown has a lot less to do with politics or religion than its title implies. “I think everyone needs to get away from that mindset in general,” Keenan offers. “It just seems to be a mess out there nowadays. We need to get back to being humans and taking care of each other and simple things like that. For us, the terminology ‘No cross no crown’ is a theme. It’s mentioned in like three songs throughout the album. We just weaved it through as we went.”