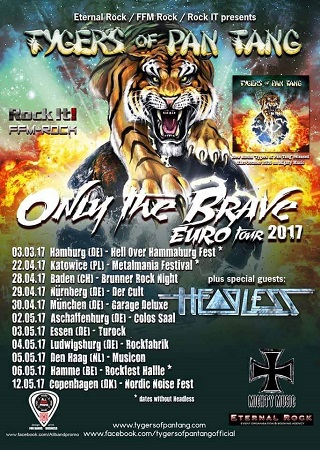 Statement from the band on April of 2017: “Here at Tyger Towers we get quite a number of requests along the lines of ‘Why isn’t the band playing in my town/country?’. To be honest there is no simple answer. It is down to a number of factors. One is venues. A venue or promoter has to want to put the band on and actually pay them. These days many venues, particularly in the UK, seem to be playing it safe with ‘tribute bands’. Another is logistics. The arrangements involved in getting the band to a gig and, getting their equipment there can be complex. Jack lives in Florence so flights have to be coordinated. Earlier this year the band arrived at a gig in Portugal but their guitars didn’t as the airline hadn’t loaded them. When they eventually got them back, the flight cases had suffered significant damage. So it is never as simple as just turning up and playing. Having said that the band loves playing live so much they would literally play anywhere!

“Last month saw the band’s new video and download single ‘Glad Rags’ released. ‘Glad Rags’ is also featured on the cover disc of Classic Rock this month with a feature coming soon. This month will also see a new 7’’ single released ‘Never Give In’ from the album with a non-album track, ‘Plug Me In‘ on the B side. It is limited to 500 copies so keep an eye on Facebook for details on how you can purchase it.

“With Only the Brave having now clocked over 107,000 views on You Tube, appearances throughout mainland Europe over the spring and summer and a UK tour almost finalized The Tygers are going to be very busy.”