During his show (05/14/17) at the New Theatre in Oxford, United Kingdom, legendary vocalist Paul Rodgers was joined by Robert Plant and by the sound of it, still frontman for AC/DC, Mr. Brian Johnson. Do you need a moment to take that in? In the clip above, the three music icons perform a rendition of the 1959 Barrett Strong classic, “Money (That’s What I Want)”.

Paul Rodgers is currently on his UK Free Spirit Tour, performing songs strictly from the Free catalogue. A list of remaining dates can be found below. 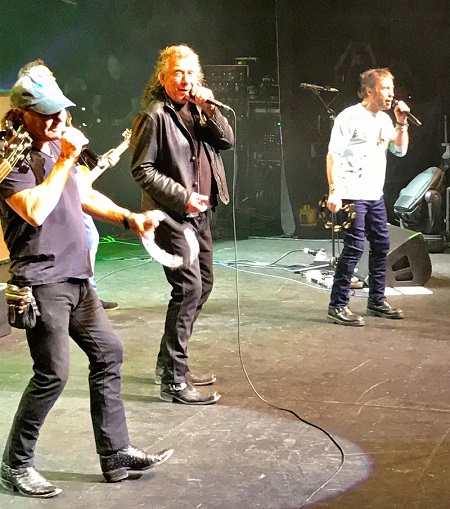 On the subject of performing songs from Free’s renowned back catalogue and why the decision was made to name the tour the ‘FREE Spirit’ Tour, Paul Rodgers had the following to say:

“It was 50 years ago in 1967 when Paul Kossoff and I met and later formed Free. We first jammed together at the Fickle Pickle Blues Club in Finsbury Park, we wanted exactly that, to be free to play the music that we loved, blues and beyond. We knew we had something special between us when people told us that when we played time stood still. He brought in the rhythm section, Simon Kirke from his band The Black Cat Bones and found the advertisement at the Nags Head Battersea for a “Bass player ex-John Mayall looking for a gig” Andy Fraser.

Not only was Koss the soul of the band, playing every note deeply…from his very soul he also had great organisational skills, everybody loved him and rightly so.

The first song that Koss and I wrote together was “Moonshine”. I remember him playing the music and he asked if I could write the melody and lyrics. In fact it was that song we were playing when Alexis Corner walked in to our rehearsal and gave us the suggestion for a band name “Free At Last”.

We went with just Free and I am still reeling from the memories.

It was so inspirational playing Free material with Deborah Bonham’s band, led by guitarist Pete Bullick, when we played charity gigs to support Willows Animal Sanctuary and Assisted Therapy Unit, which my wife Cynthia and I plus Deborah Bonham and Pete Bullick are Patrons of, that I promised myself that someday we would tour the UK with this band. Well…that someday has come. Pete will be on guitar, Ian Rowley on bass, Rich Newman on drums and Gerard Louis “G” on keyboards. Special guest will be Deborah Bonham featured with a keyboardist.

We are calling the tour “Free Spirit” and the back story is that two ponies were abandoned by their guardians on the Shetland Islands when concerned neighbours contacted Willows who agreed to rescue them. After a fourteen hour ferry ride the two arrived, one heavily pregnant and both full of worms. The drugs needed would most assuredly kill the unborn foal. However miracles do happen and a healthy foal was born christened “Free Spirit” by Willows. Which in turn inspired the name for the tour.

What better way to thank the fans for their years and years of devotion to Free than to do this “Free Spirit” UK Tour”. PAUL RODGERS