A Whole New Vintage – Over fifty years in the making, the Shelford Channel is the definitive evolution of the original technologies in Rupert’s classic console modules like the 1073, 1064, 1081 & 2254, thoughtfully advanced and refined for the 21st century studio. The Shelford Channel is built around Rupert Neve’s first new transformer-gain, class-A microphone preamplifier in over 40 years, the “best-of-the-classics” inductor EQ section from the Shelford 5052, a tone-packed Diode bridge compressor, the analog power of variable Silk saturation, a new dual-tap transformer output stage for maintaining headroom or allowing the full driving of the Channel without clipping standard converters, and twice the operating voltage of vintage designs. 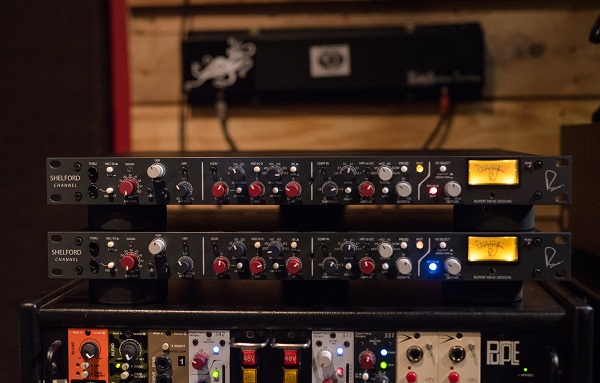 Like Rupert’s designs from his time in Little Shelford , the Shelford Channel’s preamplifier uses a directly-coupled transformer input with gain provided by the custom transformer itself – a first in over 40 years for Rupert Neve. This new custom-designed input transformer, along with its careful integration with the surrounding circuitry, is critical to the Channel’s bold and instantly recognizable character.

“It sounds like the best aspects of the 1073 and 1066’s. It sounds so familiar and comforting, and the compressor is mind blowing. You can move in fine brush strokes, but it can also be a bulldozer.”

“After working on a vintage Neve console for 10 years, it’s exciting to hear the Shelford sound like a 1073 and 2254 are supposed to, but without all the baggage. ”

“This piece to me just sounds classic. ”

““I’m pissed that it took so long to put all of this into one box. This is ALL the best stuff.” ”

“You’re going to need two of these. One will not be enough.”