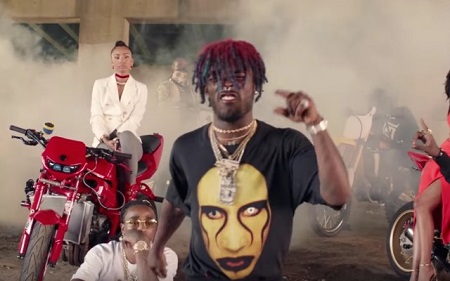 Lil Uzi Vert has never been ashamed to admit his love and respect for Marilyn Manson – he’s worn Manson shirts in videos, he’s talked about Manson in interviews – but now the Philadelphia rapper has taken that love a step further by dropping almost $100,000 (a TMZ article came out later saying the number was $220K, maybe w/ the choker? – they say $50K in just labor costs) on a 55 carat black and white diamond Marilyn Manson pendant on a 100 carat VS diamond spiked bike chain choker. The piece was created by Ben Baller who commented, “This year has been insane. And this is in the top 3 piece I’ve ever made in my career and Uzi already has a piece in my top 5 as well.” 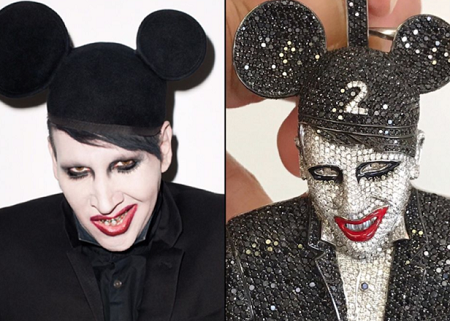 The new chain shows Manson with Mickey Mouse ears, fashioned after the shock rocker’s 2015 cover for Paper Magazine. A video and picture of the chain can be viewed below.

.@liluzivert goin crazy again. This time I made him a 100 carat VS diamond spiked choker bike chain and a 55 carat black & white diamond Marilyn Manson pendant… This year has been insane. And this is in the top 3 piece I’ve ever made in my career and Uzi already has a piece in my top 5 as well. @IFANDCO IS THE ONLY SHOP making custom link chains with invisible locks! We’re the only ones putting diamond baguettes as teeth inside custom pieces. Remember spaceships don’t come equipped with rearview mirrors! ? #LuvIsRage2 coming soon! ?? #LILUZI #IFANDCO #MarilynManson #VVS #BlackDiamonds #DiamondBaguettes #CognacDiamonds #CustomJewelry #NOCVDs #GAMEOVER ?

Previous: Saxon to Release ‘Into the Labyrinth’ Limited Edition Picture Disc on Record Store Day
Next: VIDEO: Watch the Trailer for The Smog Of The Sea featuring Jack Johnson