Hawkwind to Release ‘Into the Woods’ on Friday + 2017 Tour Dates, LISTEN! 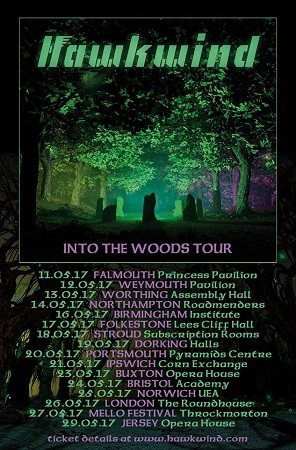 Space rockers Hawkwind will release their new album Into The Woods this Friday (05/02/17) via Cherry Red Records. According to a recent statement, the album “is the perfect sequel to last year’s acclaimed concept studio album and live stage show, The Machine Stops, which was inspired by E.M. Forster’s Sci-fi classic, a dystopian vision of the future brought to life with characteristic Hawkwind style.”  You can preview three tracks from Into The Woods by streaming the Soundcloud widget below.

Hawkwind will be touring through May, culminating in what is set to be a memorable show at London’s prestigious venue The Roundhouse on May 26th. The show will mark 45 years since Hawkwind played at the venue’s historic ‘Greasy Truckers Party’ in The Roundhouse, the same place the band recorded their classic track “Silver Machine” on February 13, 1972.

Hawkwind “Silver Machine” when Motorhead’s Lemmy Kilmister was in the band.