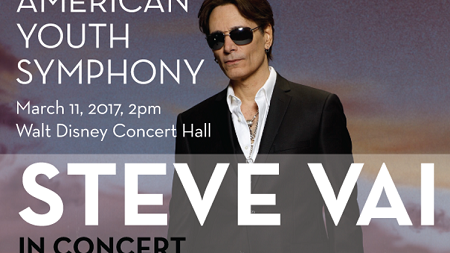 After Steve’s performance, Carlos Izcaray will conduct the American Youth Symphony as they perform “The Rite of Spring” by Igor Stravinsky, a Vai favorite.

Tickets and seating chart are available at this location

A message from Steve Vai:

I’m thrilled to announce that I will be performing at Disney Hall in Los Angeles with “American Youth Symphony” on March 11, 2017. I’ve been going to concerts at Disney Hall since it was constructed and feel tremendous appreciation to have been invited to perform my music there. The pieces that will be performed are…

1. There’s Still Something Dead In Here (without Steve)
2. Kill the Guy with the Ball (with Steve)
3. The Murder (with Steve)
4. Call it Sleep (with Steve)

These pieces were chosen by Carlos Izcaray who is the exceptional conductor of this event. It’s interesting to note that the first 3 pieces are perhaps some of my darkest and most brooding music.

“There’s Still Something Dead in Here” is a complex, dense and very atonal piece of contemporary music.
“Kill the Guy with the Ball” is violently fast and furious and the Orchestra version is just ripping.
“The Murder” is macabre and harmonically heavy.
“Call It Sleep” is from Flex-Able with an updated symphonic orchestration and will be a blessed relief after the first pieces.

Interesting that all the titles of these pieces could lead one to believe I have a preoccupation with Death! Truth is, I’m way too alive for that. Hope to see you at the show.