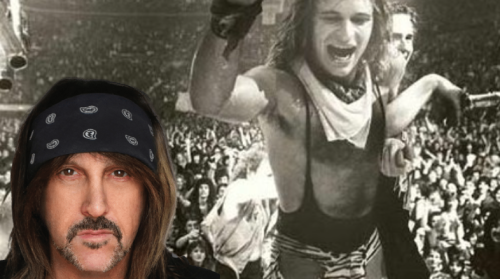 This excerpt was taken from a full in bloom interview with rock photographer Mark Weiss. Mark recently published his book, ‘The Decade That Rocked,’ which is available @ this location. 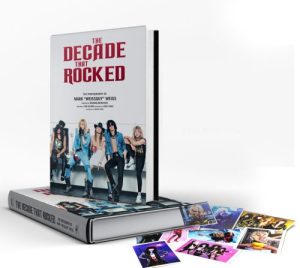 full in bloom: I know you did a ton of classic Van Halen photos, but there was a story I heard about David Lee Roth flying a kite.

Yeah. I got hired by the band to shoot them for a few days and their manager said, “Make yourself available. If they want you to shoot something, go ahead and do it.” So, I’m thinking, “Alright, something backstage or the guitars.”

Little did I know that I would get a call from David Lee Roth in the morning saying he wanted me to meet him outside by the hotel courtyard. When I went down there, he was flying a kite. I was just kind of watching him fly it, and he goes, “What are you waiting for?” Like, start taking some pictures. He had a cigarette in his hand, and he was dressed real cool. Then the kite got stuck in the tree, and he was climbing on the security guy’s shoulders to get the kite down. He was looking over his shoulder making sure I was taking pictures. 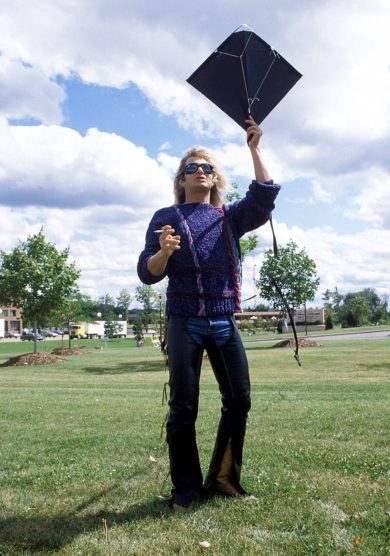 full in bloom: What were the dynamics in the band at that time? Did they seem like they were good friends?

From what I saw, everyone had their own room at that point. When we did a band shot, everyone kind of came together. But not really, they didn’t seem too close at that point towards the end. 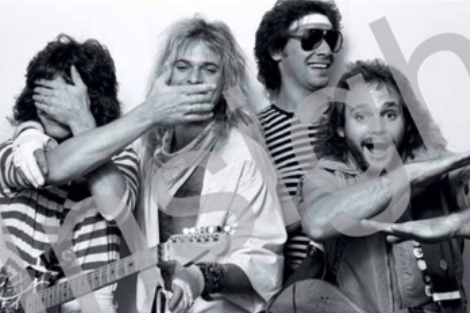 full in bloom: Are there any favorite Van Halen moments?

The MTV Lost Weekend was fun. I flew out there with the kids that won the contest, and I took them to the show. That was crazy because they got girls for them, and they were doing drugs with them. They really f***ed them up. Then they took them on stage. It was 24/7, and I documented all that. It was fun. There’s a documentary out there now on what he’s doing now.

About Mark Weiss and His Book “The Decade that Rocked”:

The 1980s were an era of musical excess, filled with spandex, makeup, big hair, groupies, and loud, guitar-driven rock ’n’ roll. Photographer Mark Weiss lived at the heart of it all, documenting the biggest and most dangerous bands of the time—legends ranging from Van Halen, Ozzy Osbourne, Aerosmith, and Mötley Crüe to Metallica, Guns N’ Roses, Bon Jovi, and KISS, as well as countless others whose sound and image defined the era. The Decade That Rocked showcases onstage and backstage moments and never-before-seen images from the period’s most historic concerts, tours, and multiplatinum album covers—all captured through the lens of Mark “Weissguy” Weiss.

Growing up in Matawan, New Jersey, Mark made a deal with a neighbor at thirteen years old to mow his lawn for the summer in exchange for a 35mm camera. He then filled his teenage nights sneaking into concerts to shoot the biggest acts of the ’70s. After being arrested for selling photographs outside a KISS concert in 1977, he walked into the offices of Circus with his portfolio and soon landed his first centerfold spread—a photo of Aerosmith’s Steven Tyler. Soon after, he became the publication’s staff photographer. In the years to come, Mark became a fan favorite and a star in his own right, with a Creem magazine reader’s poll ranking him as one of rock’s top photographers of the era. Throughout the ’80s, his photos were seen by millions, appearing in countless magazines around the world and on the covers of the most iconic albums of the decade. He traveled on tour buses alongside legends-in-the-making as they climbed their way to sold-out arenas and stadiums, living and breathing the rock ’n’ roll lifestyle with unparalleled access to capture it all on film.

Dig into Mark’s archives and take a tour through never-before-seen photos of a teenage Jon Bon Jovi during a performance with his New Jersey band the Rest, and behind-the-scenes and unreleased images from the album shoot for Bon Jovi’s Slippery When Wet and the band’s decade-ending historic performance at the Moscow Music Peace Festival. Revisit the 1983 US Festival’s historic Heavy Metal Day. Go backstage with Black Sabbath at Live Aid and with Van Halen during their biggest tours. Travel to Washington, DC, as Twisted Sister’s Dee Snider sits before Congress to combat censorship at the infamous PMRC hearings.

Captured from the unique vantage point of a photographer who lived and breathed the ’80s in all its grit and glory, The Decade That Rocked brings to life the no-holds-barred sounds and sights that changed the world of hard rock and metal forever.