English indie rockers The Cribs released the single, “In Your Palace”, you can now stream the song above. “In Your Palace” was recorded by minimalist engineer/producer Steve Albini at his Chicago, Illinois Electrical Audio recording studio. Although Albini has recorded countless bands at this point, he has probably received most of his media attention for producing Nirvana’s final studio album In Utero. You can even hear a bit of that In Utero drum sound in The Cribs new track.

“In Your Palace” is the first new music from the band since their 2015 full-length album For All My Sisters. It was the first Cribs album to not be released on their Wichita Recordings imprint, after the group inked a deal with Sony RED UK enabling them to launch their own label, Sonic Blew. For All My Sisters was produced by The Cars vocalist Ric Ocasek.

The Cribs will play a series of festival dates before hitting the road this fall. A list of dates can be found below. 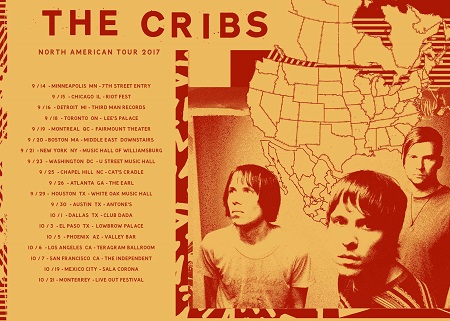