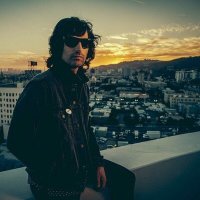 Pete Yorn:  Underwater during the “Don’t Wanna Cry” video shoot. Growing pains. When I wrote this song in 2007, this guy who was in pain and singing how he didn’t want to cry, he just wanted to avoid it, don’t wanna cry…don’t wanna feel whatever this is cos it feels shitty and unbearable, and it won’t relent, it just keeps on coming and the drugs won’t work anymore and you can’t drink it away….so in the last chorus, he’s had enough and there was only one place to go….mommas alright daddys alright…big SURRENDER ….let us see what’s on the other side of this pain and just go head-on into it…redemption and freedom I hoped. This song in the rearview reminds me that you can survive pain and heartbreak and darkness and live to tell the tale. That makes me hopeful and peaceful today . A lot of you rode that era with me and we got thru together.