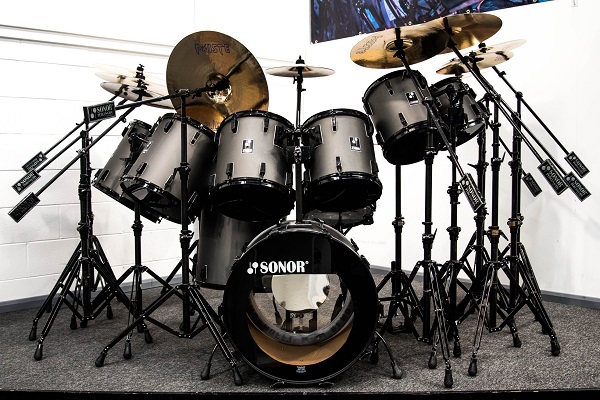 Nicko McBrain’s iconic Somewhere in Time SONOR kit (pictured above) is now on display at Nicko Mcbrain’s Drum One in Manchester.  The kit was used for every show on Iron Maiden’s Somewhere in Time tour between September 10, 1986 and May 21, 1987.  It was also used to record the band’s seventh studio album, Seventh Son of a Seventh Son.  This is the first of his kits to appear in-store, more can be expected throughout the year.

Located in Manchester, the retail capital of the North of England on the Trafford Park business estate, the store features Planet Paiste, the UK’s largest dedicated Paiste show space and the Sonorsphere where customers will find the biggest selection of Sonor products in the country. All major drum and percussion brands will be stocked. Formerly Manchester Drum Centre, established since 1983, Drum One acquired the business on November 1st 2017 following the retirement of long term owner and operator Rob Pearson. The business continued to operate under the name Drum Centre until the formal launch of Drum One on January 25, 2018.