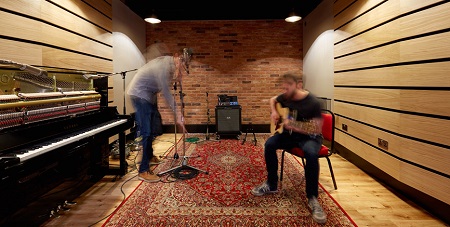 For nearly two years, Abbey Road has been undergoing its largest renovation since the studio first opened its doors in 1931. After renovating and transforming the main townhouse front room and garage area, there are now two brand new studio spaces, The Gatehouse and The Front Room, together with a state-of-the-art mix stage for film post-production. The studios were built as ‘accessible entry points, designed to make the magic of Abbey Road and its award-winning studio talent accessible to all recording artists and A&R budgets.’

Artists working in the inspirational spaces of The Gatehouse and The Front Room will have access to state-of-the-art recording technology, legacy vintage equipment and instruments used on landmark recordings as well as tapping into the studio expertise of Abbey Road’s award-winning engineers.

Abbey Road Studios was established by the Gramophone Company, a predecessor of the record company EMI, who owned it until Universal Music took control of a portion of EMI in 2012. The studio was used by the Beatles, Pink Floyd, John Williams and the London Symphony recorded the Star Wars soundtracks there and it’s where all three Lord of the Rings films were scored.