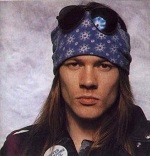 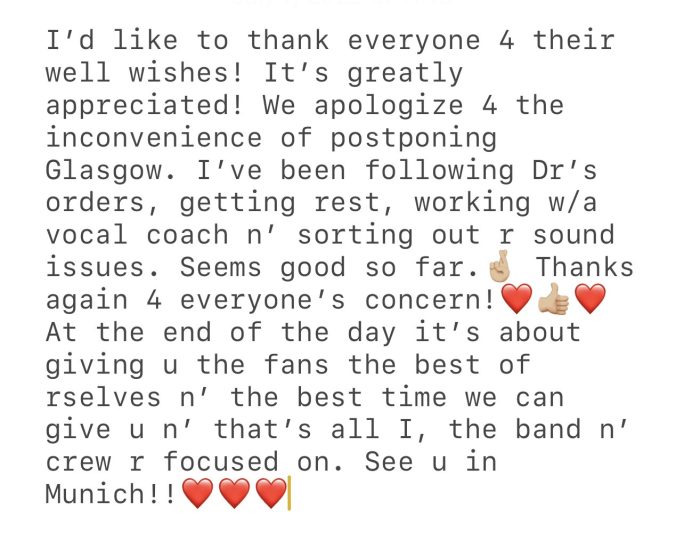 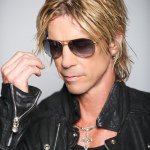 Thank you Tottenham Hotspur and London! And thank you Carrie Underwood for rockin with us! Photo by the incomparable Susan Holmes Mckagan. 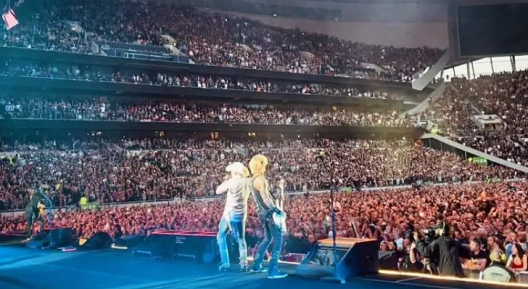 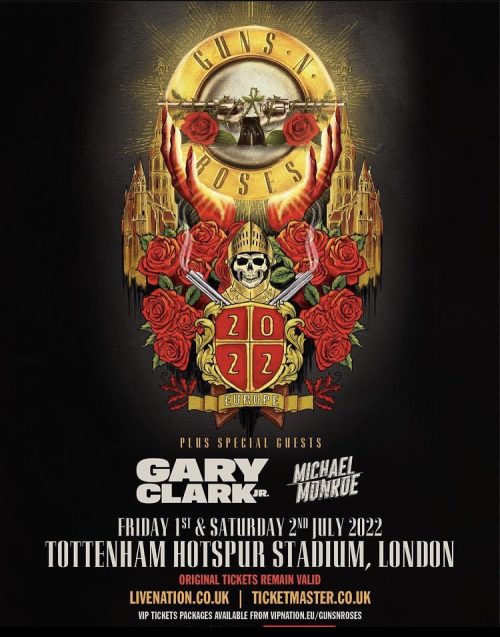 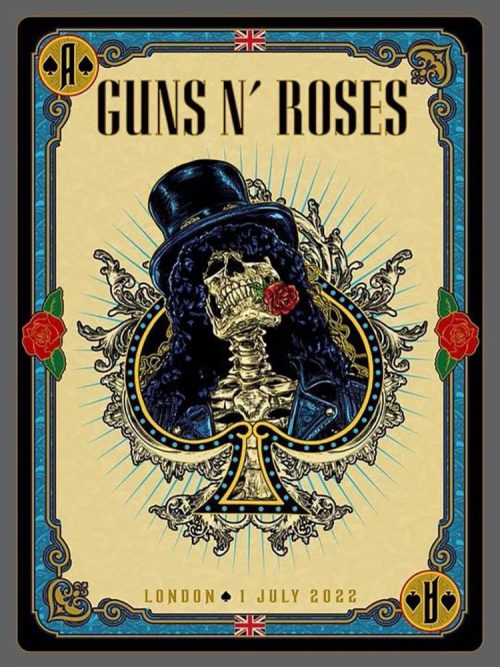 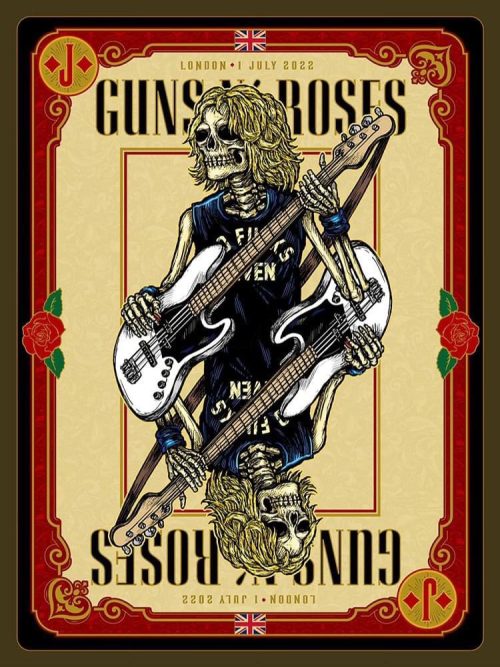 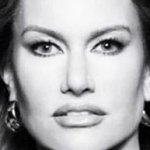 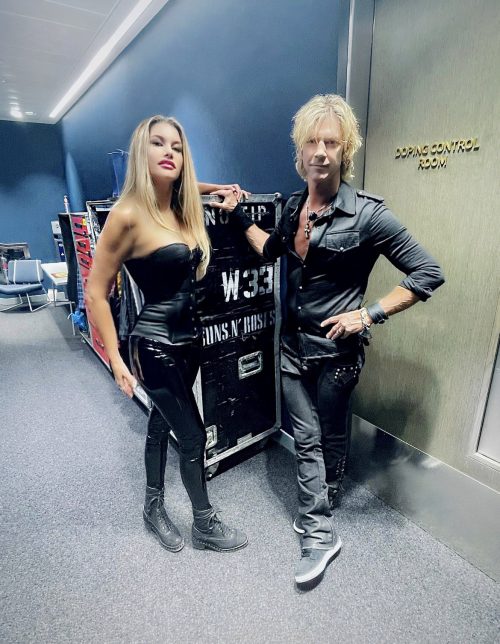 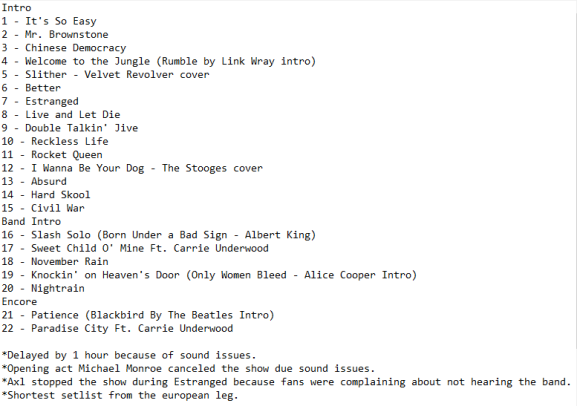 Who can resist this song @gunsnroses #TottenhamHotspur #london 🇬🇧🎶 pic.twitter.com/AjkWK9hxGv

I’m extremely disappointed with the service I have received from @TicketmasterCS. I cannot access my account to print my tickets ahead of tomorrows @gunsnroses concert @ the @SpursOfficial stadium & nobody at @TicketmasterUK wants to help. Hopefully this issue will resolved asap!

Just Great. We arrive @SpursOfficial for the Guns n Roses gig and our ‘transferable’ disabled parking tickets from the original date are being refused. Not a great start to the event. Spurs access say they are valid – parking team are not letting us in. TALK TO EACH OTHER!

@gunsnroses @SpursOfficial sort the sound out!!!!! We can’t hear anything!!!!! Rubbish audio

What is going on with these queues? Half an hour after the first act was meant to be on we are still outside the venue…@gunsnroses @LiveNation @SpursOfficial
Taking the piss a bit, no water, no toilets and absolutely no communication

Shambles. Maybe power cut, issues with sound check, the stage, who knows. Over 2 hours wait before being let in, 1 support cancelled, Guns n Roses finally on at 7:45 (that’s the only good bit)

@SpursOfficial 40 years I’ve been coming to Spurs, never seen such a shambolic effort as I have today coming here to see Guns n Roses! Gates should’ve opened at 1530, still standing here at 1602, nobody has a clue what’s going on!

Waiting for #GunsNRoses to kick off at @SpursOfficial stadium pic.twitter.com/2NlRtuc0Cx

What’s wrong with the sound at Guns N Roses? People are having conversations and walking out. We can’t hear anything, just the low end treble. Sounds like Axl is in another room. There’s an echo and seems back speaker is delayed… @SpursOfficial @gunsnroses

Axl just stopped Estranged because of the shitty acoustics inside Spurs Stadium. He’s aware of it and wants it fixed. He’s definitely pissed/annoyed.

Ready for #gunsandroses @gunsnroses to begin. @SpursOfficial could not organise a piss up in a brewery. Dreadful pic.twitter.com/XCGHaP90G7

Bit like watching a school band putting their heart and soul into their set but you can’t hear a word their singing because the sound is awful – Sort it out boys!! @SpursOfficial @gunsnroses

I’m at the Spurs with a neck oil! *watching Guns’n’Roses… pic.twitter.com/w85XnZ9qRN

Oh I know she is SCREAMING inside, get it girl 😭🙌 pic.twitter.com/b4m780dC7g

@SpursOfficial @gunsnroses I can hear the people next to me talking but not the band pic.twitter.com/Wr40v0fzSG

@gunsnroses husband and 14yo travelled to London for the gig at spurs tonight. Left early due to shocking sound quality. Ruined birthday present. Not exactly a cheap event to attend – really poor #GunsNRoses #tottenhamstadium

At #GunsNRoses gig at #Spurs stadium and all you can hear is kick drum! Axl, you really want to sack the sound guy!

Fair dos after a very shaky start sound wise, Guns n Roses put on a great show. For a child of the 90s a big bucket list item ticked off! pic.twitter.com/IONFU3Knqo

We were gutted- Axl knew things were not right too, several times he asked audience what was wrong, so sad 😞 my favourite band in the world 😭😭😭

@Ticketmaster Michael Monroe did not play. One of my favourite artists Gary Clark Jr played half a set. Guns n Roses played at least 4 songs less than usual.. where is my compensation??

Yes the sound was absolutely shit 75% of the time but @SpursOfficial stadium did a fantastic job – all staff were amazing & facilities were great. @gunsnroses need to sort out their sound team – no where near as good as the last time we saw you in London. pic.twitter.com/TODWxlojzw

The worst concert that I’ve been to

o’ what a night @gunsnroses pic.twitter.com/wewjUVe2Ze