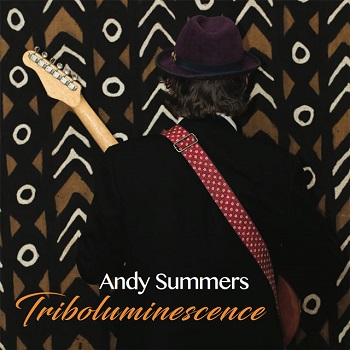 Ex-Police guitarist Andy Summers will release his new album, Triboluminescence. His fourteenth solo effort will be available on March 24th via Flickering Shadow Productions. The album is said to be his most introspective work to date.

“Triboluminescence is actually a scientific word that means creating light from dark, which I believe is a great metaphor for any creative act and, especially, music,” Summers says.

“I felt compelled to follow up the record I made last year, Metal Dog, where I was trying to go into a new territory—with not just a straight-ahead jazz or jazz fusion or rock or pop, but something very much my own genre. This record results from a lifetime’s worth of receiving influence, digesting it and trying to create a new voice. I feel like I’m taking the Metal Dog album and moving on from there and trying to expand the writing, the tonal palette and this idea that I have about creating new music.”

The album ends with a lovely track called “Garden of the Sea,” which features cellist Artyom Manukyan.

“’Garden of the Sea’ is played with a reverse looping effect—it’s like playing into a mirror,” Summers says. “And when you set the cello against that, you get this beautiful, pastoral effect. It’s a lullaby at the end of the album.”