Concert for George (Harrison) Screenings/Theaters in the US – List, Find 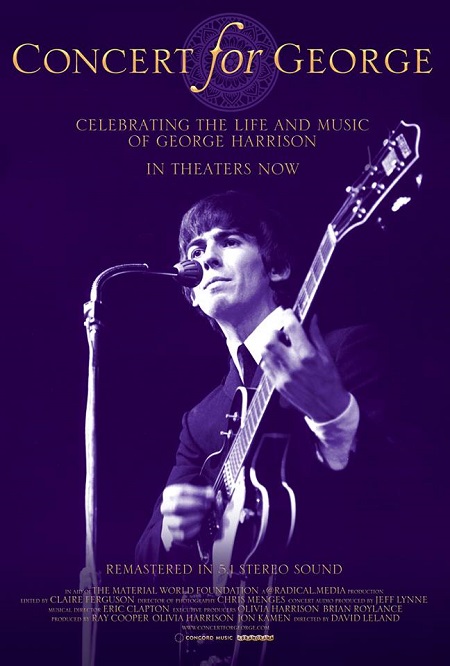 The limited theatrical run of Concert for George, a film celebrating the life and music of George Harrison, launches this week with over 100 screenings across North America and new dates being added daily.

The first half of the show provided an insight into George’s spiritual self as Anoushka Shankar and a 16-piece orchestra of Indian musicians performed a special composition by her father and George’s mentor, Ravi Shankar. The piece was entitled “Arpan”, which means offering. Within the piece Ravi expresses aspects of George’s moods and spiritual aspirations. “Arpan” includes Eric Clapton playing a haunting acoustic solo.

The second half gave the audience a rare sighting of members of the Monty Python team performing some of George’s favorite skits, including participation from a surprise guest. This was a tribute to George’s well-known sense of humor.

The night then moved to Eric and friends giving the performance of their lives singing George’s songs. All the musicians that George worked with over the years, from The Beatles to the Traveling Wilburys, dedicating their time to learn the songs and perform them as a tribute to their dear friend.

Eric Clapton led the band with Jeff Lynne singing “I Want To Tell You”, “Inner Light” and “Give Me Love”. Jools Holland and Sam Brown gave “Horse To The Water” it’s first live outing. Tom Petty and the Heartbreakers gave a particularly resounding performance of “Taxman” as well as “I Need You” and the Wilbury’s number, “Handle With Care”. Ringo Starr caught everyone with a tear in their eye with a rendition of “Photograph”, a composition he wrote with George, which seemed to sum up how everyone felt. Paul McCartney, fresh from his world tour, treated everyone to a little bit of Ukulele – one of George’s favorite instruments and joined Eric and band for “While My Guitar Gently Weeps” and “For You Blue”. Billy Preston had everyone out of their seats and singing along with “My Sweet Lord”. The band then came together to give a rousing version of “Wah-Wah”.

Joe Brown closed the evening with the old standard; “I’ll See You In My Dreams”, a loving and appropriate sentiment. It was a great show for one of the most loved men of our generation. We will remember George and this evening forever and hopefully we will see him in our dreams.

The film was directed by David Leland and produced by Ray Cooper, Olivia Harrison and Jon Kamen. All profits from the sale of Concert for George products will go to The Material World Charitable Foundation, founded by George in 1973.