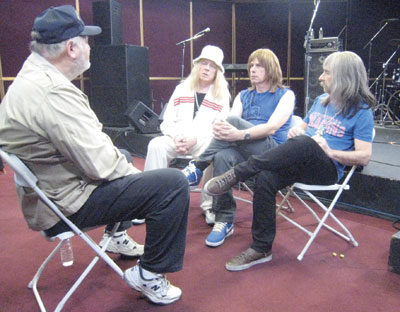 Vivendi SA, a French media company, is being sued by the This is Spinal Tap creators for $400 million, alleging fraud, accounting misappropriation, and breach of contract. Harry Shearer filed the complaint in October and it looks like the rest of the gang is now on board. Rob Reiner, Christopher Guest and Michael McKean have all joined the lawsuit. The Spinal Tap creators accuse Vivendi of neglecting to pay “substantial revenues” and failing to “account honestly for income actually received”. In addition Vivendi allegedly engaged “in anti-competitive business practices by manipulating accounting between Vivendi film and music subsidiaries” and “in fraud to deprive the Spinal Tap creators of a fair return for their work.” The lawsuit claims from 1984 thru 2006, Vivendi only paid $81.00 to the creators for their share of the merchandising. In addition, they also claim that from 1989 thru 2006 they were paid just $98.00 for their share of soundtrack sales.

According to Box Office Mojo, the cost of making This is Spinal Tap was just $2.25 million while the movie grossed $4.5 million in US Movie Theaters alone. Beyond that, it has become a cult classic popping up on tv and dvds as well as a theatrical re-release in 2000.  The lawsuit claims that the 1982 production agreement required 40% of net receipts to be paid to the film’s creators.

Shearer has filed to terminate Vivendi’s copyright due to US laws allowing authors to cancel copyright grants after 35 years. This would mean that Vivendi could potentially lose their rights in 2019. According to the lawsuit, Shearer “is concurrently issuing notices of copyright termination and has filed trademark applications to secure creative rights.”

Guest issued the following statement, “The deliberate obfuscation by Vivendi and its subsidiaries is an outrage. It is vital that such behavior is challenged in the strongest way possible.”

Reiner’s statement, “Fair reward for artistic endeavor has long been raised by those on the wrong end of the equation. Such anti-competitive practices need to be exposed. I am hoping this lawsuit goes to 11.”

McKean’s statement, “This is Spinal Tap was the result of four very stubborn guys working very hard to create something new under the sun. The movie’s influence on the last three decades of film comedy is something we are very proud of. But the buck always stopped somewhere short of Rob, Harry, Chris and myself. It’s time for a reckoning. It’s only right.”