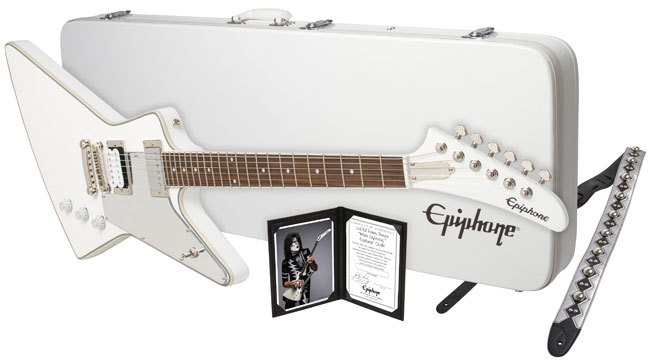 What inspired your new signature model?

Tommy: For four or five years now I’ve had the good fortune of having two beautiful Epiphone signature model guitars. Both have been really well received. Traditionally, I’ve always been a Les Paul player, but occasionally I’ll play an Explorer onstage. Two years ago my second signature Epiphone, the White Lightning Les Paul, struck a chord (no pun) with musicians and KISS fans around the world, selling out a limited edition run of 1,500 guitars. To keep that momentum and I guess continuity going, I’ve decided to do a limited edition White Lightning Explorer. My new Epiphone White Lightning Explorer is hot, loud, and delivers the big sound I need onstage every night. It’s an instrument that suits musicians from all walks of life. My Epiphone signature guitars are a tried and true part of my arsenal. I never leave home without ’em!

Do you find notice any changes to your approach when you go from playing the Explorer to a Les Paul?

Tommy: I’ve played Les Pauls forever, but always loved the tonality of Explorers, SGs and Flying Vs. They are in the same ballpark as Les Pauls but with what I’ve always considered more mid-range and punch. Explorers always felt and looked right to me onstage, so a few years ago Gibson made me two silver sparkle versions. When Epiphone and I talked about a new guitar for 2017, an Explorer model made sense. Playing-wise, my Les Pauls and Explorers are similar. Obviously the guitar designs are completely different, but the neck contour, pick-ups, tuners and chrome parts are the same. I’ve noticed you can reach the highest notes on the neck of the Explorer easier than on a Les Paul.

I think you mentioned you have some vintage Epiphones at home. Can you tell me about them? Maybe there could be a Tommy Thayer signature acoustic in the future.

Jim Rosenberg (Epiphone Pres.), what do you think? (laughs) The pride of my guitar collection is my 1963 Epiphone Texan acoustic. It’s beautiful, just like Paul McCartney and Peter Frampton have played for years. When I graduated from high school in 1978, my parents wanted to give me a nice guitar as a gift, which was so cool of them. My mom talked to my friend Greg Georgeson who knew a lot about guitars, and he helped them pick out the guitar used at a downtown Portland guitar shop. At first I thought it was just a cool used acoustic guitar, but as every year goes by it becomes more of a really special and sentimental procession.