Terry Date on Dimebag Darrell: “You can’t get his sound unless you have his hands, his head, and his heart. “ 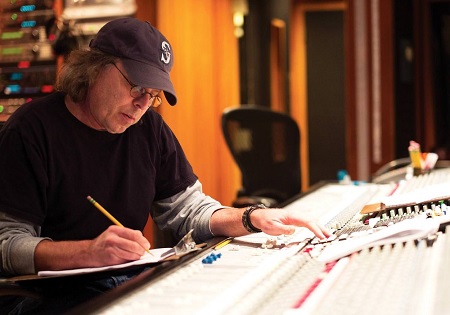 Early in your career you produced Mother Love Bone’s Apple. What was it like working with the vocalist, the late Andrew Wood?

I remember a number of things we did with Andy during that record. When we were doing his vocals, I’d set him up in this old ‘70s kind of room – with a drum booth off the side of the live room. Since it was a ‘70s studio, they always put the drums in a dry area and had the big live room for everybody else. Andy always had his keyboard set up in front of him, because he felt comfortable having either his hands on it as he was singing, or hitting a key for a note, from time to time. I put Andy in that little corner alcove, with his keyboard and a microphone, and he always had candles set up on the keyboard for a vibe. I’d have him sing the song three or four times, and record all three takes. When we felt we had something, I’d have him come in the control room, and he and I would sit together and comp the final vocal take. With Andy, I would put some delay and reverb in his headphones while he was singing, just to get the performance. I tried to make the headphones sound as live and inspiring as I could. All these guys – like Andy and Chris [Cornell, of Soundgarden] – were used to playing live. They tended to play medium-sized clubs at that time, so I tried to make it sound somewhere between a medium-sized club and a larger arena. Something to be inspiring when they were singing, [in order] to make the performance come out. Andy’s vocal style was somewhere between David Lee Roth and Freddie Mercury, and his personality was too. I think more than his singing voice, my memories are of his personality, and his charisma as a person. He had this “little kid” quality that was really magnetic. I remember on one particular song we were sitting in the control room listening to vocals, deciding which parts of which takes were the best, when all of a sudden he jumped up and ran out of the room. I was thinking, “What the fuck?” He ran into the vocal booth and there were three-foot flames coming up off the carpet! I guess one of his candles had fallen over, hit the carpet, and started it on fire, so we had a bonfire coming up underneath his keyboard. [laughs] I remember my wife and I driving once, after a Mother Love Bone rehearsal, and we saw Andy walking down the street with his keyboard under his arm. We slowed down, and I said to him, “Andy, rehearsal ended two hours ago. You’re just now leaving?” He replied, “Yeah, I stayed a little longer because I wrote another album.” That’s the way he was. He was so prolific; he lived for it.

Soundgarden’s Badmotorfinger helped kick off a new sound and era for rock. What was it like in the control room, capturing the power of that band live to tape?

Well, the funny thing was Chris was in the control with me, recording! We recorded Badmotorfinger at Studio D Recording in Sausalito, California. It was basically a one-room studio; one big live room, with a couple of little iso-booths. I had Matt [Cameron, drums] in the middle of the room, and then I had Ben [Shepherd, bass] and Kim [Thayil, guitar] in the room with him, but their amps were separated. There wasn’t any place for Chris to be, because his voice is so loud it would have gotten into the drum mics. So Chris was in the control room with me, playing and singing when the band played live.

Chris did like to have a lot of effects in his headphones while he sang. Not for the final product so much, but it gave him a little bit more confidence with all that reverb and delay. It’s like a guitar player having a little extra sustain or overdrive on their guitar; it makes everything easier to play. He liked to have some of that in his ears. Those two records – Badmotorfinger and Louder Than Love – were a lot of work for him, because it was physically demanding and really hard to hit those high notes. The intensity and difficulty of what he was singing was really hard and [consisted of] high vocals, so it was definitely a process to get those right. He was his own worst critic. He’d know when he had it on certain days, and when he wouldn’t. We’d come in on some days, he’d start singing, and within a half-hour he would say, “It’s not there today,” and we’d go on to something else. He knew what he wanted more than I knew what he wanted; I was there for moral support more than anything else, as well as to give him what he needed technically. So – especially on Badmotorfinger ­– it was a very difficult exercise for him. He pulled it off great, but it was a lot of work for all of us. I like [Neumann U] 87s, but I do remember having a [Neumann U] 67 on him, which has always been one of my favorite vocal mics for either a female or high male vocal. At the time when I was working with Soundgarden, Chris was still primarily singing in that full-voice falsetto; that very high, intense voice. He wasn’t doing the lower, quieter vocals as much. With bands like Soundgarden and Dream Theater, I didn’t get involved with tunings or arrangements so much. I would try and capture them as live as I possibly could. I’d try to capture the vitality of the live show. I wanted them to feel like what they had done on their own was valid, and really good. Then it came down to performance issues and whether or not they were pulling something off in a convincing way. But I didn’t get too involved with micro-managing what they were doing.

Your work with Pantera on Cowboys from Hell and Vulgar Display of Power broke ground with a new hybrid of metal. How did you track Darrell “Dimebag” Abbott’s monster guitar sound?

I get this question a lot from people. The first thing I’m going to say about him, and it’s really true, is you can’t get his sound unless you have his hands, his head, and his heart. He’d always have two amp stacks. One stack was straight and the other ran through an MXR flanger/doubler that was set in a particular way. There was always an MXR foot pedal EQ [six band graphic equalizer] in front of everything, mainly to bump up a little extra overdrive on the front side of the amp head. We always experimented on every record, trying different tube heads, but we never really used one; it always ended up being the Randall amplifiers [RG100H and Century 200]. As far as the mic’ing goes, we did a lot of things early on. I used a technique, for a time, where I would put up four microphones – a microphone on each speaker – it usually was a 57. I’d leave the amp hiss going, put on headphones with a mic through it, and would move the mic until the hiss was as loud as it could be on each individual speaker. I’d end up with four mics on the four speaker cabinets, each one placed to where it was the loudest it could possibly be, so I knew they were all in sync. We would record all the rhythm guitars for the whole album like that. There were other times when I would take a 57, put it straight onto one cone on one speaker, and then take another one and put it at a 45-degree angle [to the first mic] to create a little phase scoop out of it. We would spend a lot of time at the beginning of a record trying these different mic’ing techniques, then we’d settle on something and record the record. But here’s a lesson that I learned early on: we’d record all the rhythm guitars, tear everything down, and then, towards the end of the record, Dime would go, “I’ve got one more part I hear in my head that I want to put on a song or two.” We would throw up one cabinet, and I’d put a 57 on it – because it was a secondary part he was going to throw in. Then we’d listen to it, and it usually sounded better than the rhythm guitars we’d spent all this time mic’ing, in all these exotic ways. I realized that you don’t need a whole lot of fancy stuff with him; just get a mic on him. Keep it simple, and it sounds better. One trick that I picked up from working with Metal Church is that they used to take their picks and scrape them on the sidewalk before they came into the studio – the flat edge – to rough them up and make the picking edges sharper, so that it’s like an ice-skate. You flatten the bottom to make the edges sharper. You get more attack across the strings by doing that, and that was one thing I actually used to do with Dimebag. We’d take a razor blade and sharpen the flat edge of the pick so we’d get a little bit more attack on the pick when he was playing.