Robert Plant Interview: “If I did the same thing all the time I’d be in a band doing really well” – VIDEO 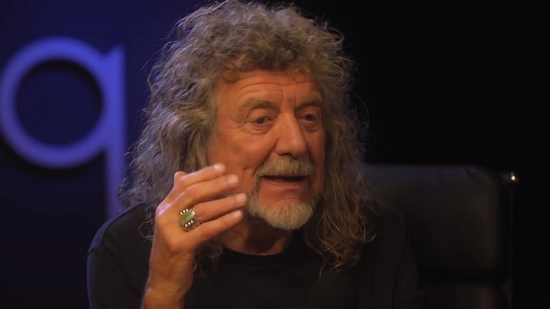 Robert Plant was recently interviewed by q on cbc.  Watch the video below.

On his most recent album, Carry Fire, his second with the Space Shifters, Plant continues the journey that began when he, Jimmy Page, John Paul Jones and late drummer John Bonham changed the course of music history.   “In the last 38 years since John Bonham passed away I’ve done a hundred different things with a thousand different people,” Plant says. “And every time I’ve gone on these little adventures, I’ve tried to make it as bright and sparkly as possible so that everybody is really totally transfixed with what we’re trying to do.”

“You know if I did the same thing all the time I’d be in a band doing really well.”

“Rain Song”:
“Take the Rain Song in Zepp. If you think about it, I was 23, I suppose Jimmy was 50,” he jokes. “[He was] 27, or whatever it was, and we were working in all sorts of areas and you cut your cloth accordingly. It’d be a pretty dumb move to try and make everything have a big impact riff and that kind of puffy chest job, you’ve got to get down into really where the emotions take you. And so all the way through Zepp there’s been that sort of dynamic contretemps and that carries on all the way through anybody’s life if they’re singers.”

The former Led Zeppelin frontman is currently on tour promoting his latest solo effort, Carry Fire, which was released on October 13, 2017 via Nonesuch/Warner Brothers Records.  The self-produced eleventh solo album is the follow-up to 2014’s lullaby and… The Ceaseless Roar.