Paul Stanley: “Imagine – YOU…On stage…Jamming with ME in Las Vegas at House of Blues! Plus we’ll jam along with Tommy Thayer, Rudy Sarzo, John 5 & Tommy Aldridge at a private R&R Fantasy Camp facility!” Details at this location. 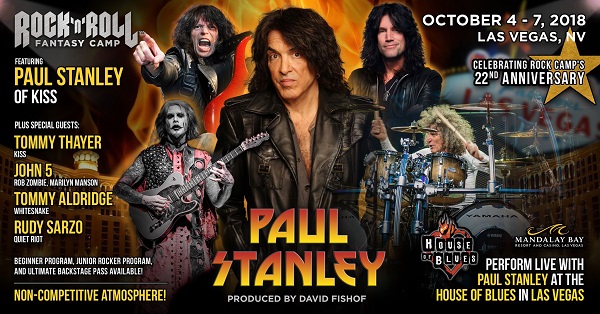 The great thing about rock-n-roll is you realize the top of the mountain is big enough for more than one band.”
– Paul Stanley

You will jam live at the Rock and Roll Fantasy Camp facility with Paul Stanley, Tommy Thayer, Rudy Sarzo, John 5 and Tommy Aldridge and then Paul Stanley will perform with you live at House of Blues in Las Vegas.

Along with jamming some of your favorite KISS songs such as “Deuce,” “Love Gun,” “Rock n Roll All Nite” and “Detroit Rock City,” a special addition to this camp will be the opportunity to jam some of Paul Stanley’s favorite R&B songs with him and Tommy Thayer. Paul has taken his R&B project, Soul Station, around the world, and now he is bringing his passion for 60’s and 70’s classic R&B to Rock ‘n’ Roll Fantasy Camp.

We’re living in a time of being fed canned pre-programmed backing tracks and lip syncing in place of the electricity and passion of real live R&B,” “When I was a boy, before I ever saw the Who or Led Zeppelin, I saw Solomon Burke and Otis Redding. I saw the Temptations and all that music is part of the foundation of the music I’ve made.”
– Paul Stanley