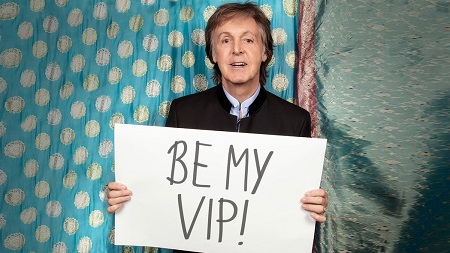 Paul McCartney is set to perform a huge arena show at Barclays Center in Brooklyn, and while there’ll be tens of thousands of loyal fans, Paul’s bringing just one on stage with him: YOU. Not only will you and your guest score VIP tickets to the show, you’ll also get exclusive access to the sound check earlier in the day. That’s where you’ll see the master at work, getting everything perfect for the main event. That’s ALSO where you’ll join Paul—one of the world’s most legendary musicians ever in the history of the world—ON STAGE and sing “Get Back” with him. Flights and hotel included. For more info, GO HERE.

YOU AND A FRIEND WILL:
Score VIP tickets to Paul McCartney’s show at Brooklyn’s Barclays Center
Join Paul on stage during sound check and sing “Get Back” with him
Get flown out to NY and put up in a 4-star hotel

Donations will go toward the The David Lynch Foundation

The David Lynch Foundation (DLF), a 501(c)(3) nonprofit organization founded in 2005, targets the epidemic of trauma and toxic stress among under-resourced populations through the implementation of the evidence-based Transcendental Meditation technique. DLF has served more than 500,000 children and adults worldwide, with a focus on urban youth in underserved schools, veterans suffering from post-traumatic stress and their families, and women and children who are survivors of domestic violence and sexual assault. DLF also works with the homeless, prison populations, people living with HIV/AIDS, and others.