Pestilence, “We do not condone or support nazism or racism in any way” Tour Cancelled 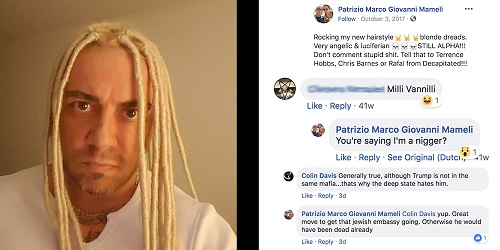 Pestilence mainman Patrick Mameli has responded to a recent article that appeared on the MetalSucks website. His official statement can be read below.

“PESTILENCE nor myself are in any way a political band. We do not condone or support nazism or racism in any way. Pestilence exists only to create awesome music for our listeners and fans. We have many fans that know and have followed PESTILENCE since the beginning. We have never been a political band. PESTILENCE exists for over 30 years now and we have never had to deal with any accusations on being racist, supporting nazism or anything similar. We will not let our good name be slandered by sites like MetalSucks, that are just out there to create chaos. Most people got our back on this one, but there seem to be some folks out there that still believe those BS stories. My words have been twisted and a ridiculous story was produced to make us look bad. Again: we are not a POLITICAL band. We entertain. That’s all. Don’t let your judgement be clouded by just a few people out there that want to slander bands for their own personal benefit. This time it’s us, the next time it could be you or your band. Stop this madness. This way alot of bands could get banned from the U.S. just because of false accusations and statements. We can not let this happen. The metal community needs to stand up against these type of sites!!!!”Being Dutch I can tell that what I said isn’t racist at all. It’s simply translated incorrectly. That word has no negative association in the Netherlands as the infamous n-word has in the US. There is a different inappropriate word in Dutch that is a better translation. All in all, this is nonsense of the highest order.”

UPDATED (7/26):
Patrick Mameli:
“Thanks to metalsucks and their followers, our US mini-tour has been cancelled by our U.S. promoter. We are saddened by this and how people believe a shady person, to say the least, over us/me. 30+ years of death metal, and never one accusation of racism, nazism or sexism. What a joke. Pestilence’s line up has always been international. How can that be racist? Good job done metalsucks and the people involved in trying to slander us. Pestilence will remain with pride and dignity. We love ALL our fans worldwide. No matter race, culture or any difference. Together we stand tall.”