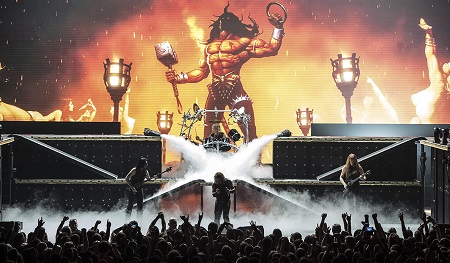 Manowar released a statement regarding their rescheduled Stuttgart, Germany concerts. On Wednesday (12/14), the band were forced to cancel the remaining two shows of their Final Battle World Tour 2017, after bassist Joey DeMaio came down with a bad case of food poisoning and dehydration.

“I want to thank our loyal Manowarriors for their overwhelming support and understanding regarding the two Stuttgart, Germany concerts that need to be rescheduled.

“The doctors meanwhile confirmed that I am well enough to fly back to the U.S. in a few days and should be able to ring in the New Year at 100%. That means alcohol and true metal – and lots of it! The same as you all will be doing!

“In the meantime our promoter, Lars Berndt Events, is working on securing new dates for Stuttgart.

“Hold on to your tickets. We will return to Stuttgart with an ass kicking, ground-shaking show that will be well worth the wait. You don’t want to miss these shows!!”