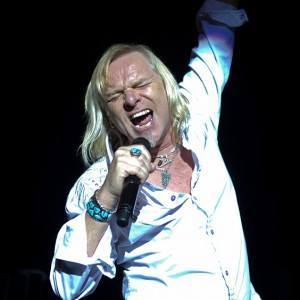 “I have had a medical issue for some time that has needed urgent attention. But, due to our continuous touring schedule, I have not been able to address this. Unfortunately, it has come to a head and now I need to get this procedure done urgently to prevent the risk of further complications. This means that we are forced to cancel our European run in February which, as any URIAH HEEP fan knows, is totally against our nature. I can only apologize to all our fans on behalf of myself and the band and we will be back to play for you very, very soon.”

“I am now at the end of my 3rd week postop following my second surgery. After meeting with my surgeon, l am happy to report that everything is healing nicely, and recovery is on track as he predicted. I‘m pretty mobile now, and I have even been out of the house a few times getting some walking in and some much needed fresh air. Next week l plan to start some physio and start warming up my voice again, getting back into shape for the upcoming ‘Rock Meets Classic’ tour at the end of March.
I’d like to thank everyone for their unbelievable support and well wishes throughout these past weeks. You’ve truly blown me away.  2017 will see an even stronger Uriah Heep on stage and I can’t wait to get back out where l belong.
Cheers, Bernie.”