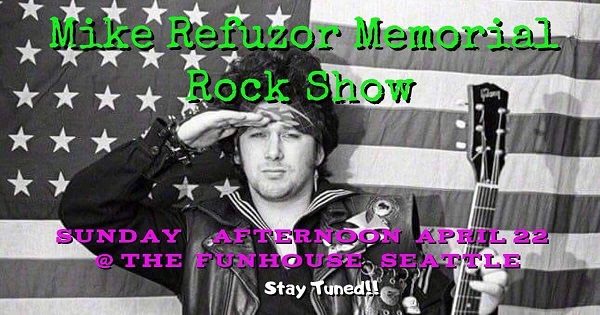 Mike Refuzor Memorial Rock Show: Honoring the one and only Mike Refuzor.  Friends, bands, bandmates and fans will gather together at the Funhouse on April 22, 2018 to celebrate the life of ‘Seattle’s Godfather of Punk Rock.’  More announcements coming soon.

As previously reported, Mike was found passed out on a neighborhood sidewalk close to the University of Washington in Seattle on March 3rd.  After a passer-by found him and called 911, Mike was admitted to Harborview Medical Center in critical condition. He never regained consciousness and his family later removed him from life support.  It is believed his death may have been brought on by a heart attack or stroke.

Previous: Judas Priest “With Darkness All Around Me” Video Preview
Next: Roger Daltrey: New Album in 2018 ‘As Long As I Have You’ + Song