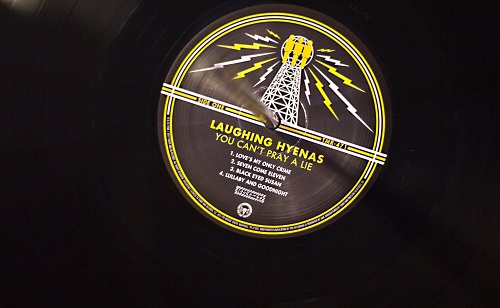 For the past year, Third Man Records has been working closely with Touch and Go Records and the surviving members of Laughing Hyenas to craft deluxe vinyl reissues of the entire Laughing Hyenas’ catalog.  The seminal Michigan group’s releases have been lovingly remastered for vinyl and cut by Bob Weston at Chicago Mastering.  Watch a teaser video for the reissue series below.

These were the mid to late 1980s and in the USA it was a time when so much more of the USA underground post-punk-hardcore-new wave-no wave etc scene (Butthole Surfers, Dinosaur Jr, Green River, Big Black, Mission of Burma et al) just slayed, continually. Each group different and strange and fun and blowing open a hole for the future. Laughing Hyenas were one of the defining jewels in this era and have since come to where fate has brought us all in a dynamic variance of good, better, bad, worse and everything in between.”

All the Laughing Hyenas records were originally released (and continue to be available digitally) on Chicago-via-Detroit label Touch and Go Records (our partner on these vinyl re-issues). Touch and Go’s catalog also includes the early ‘80s Negative Approach and L-Seven records. Third Man has been working very closely with Corey Rusk and Touch and Go Records as well as the surviving members of the band to make sure that these reissues get the attention they deserve. Each record will include unseen photos and images of “Damn, that would have been a sick show!” flyers as well as testimonials/thoughts/stories/liners by Thurston Moore, Butch Vig, Brian Turner, Ben Swank, Aaron Dilloway, Allyson Baker to name just a few.

Previous: Does Keith Richards Believe in Aliens?
Next: Terry Date on Dimebag Darrell: “You can’t get his sound unless you have his hands, his head, and his heart. “