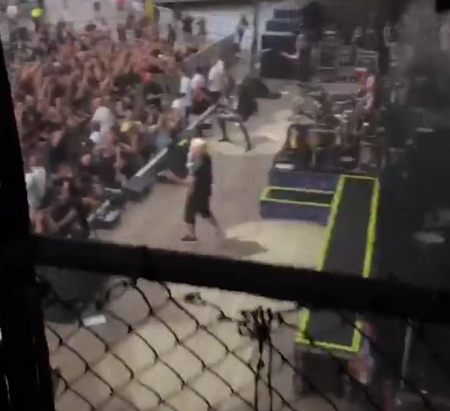 Anthrax opened their show with the main riff from Pantera’s “Cowboys from Hell” at the Jones Beach Theater in Wantagh, New York on July 29th, before segueing into “Caught in a Mosh.” Watch the Instagram clip below. Filmed by drummer Mike Portnoy.

Fun night at Jones Beach! All bands had a great set. Many friends, fellow musicians in attendance. Snuck out into the house to catch a bit of @slayerbandofficial, who were on fire (literally & figuratively). pic.twitter.com/BDzKKmqpp4

Jones Beach yesterday: The reason I look like I’m on vacation is the sun was GLARING (I think the snake could’ve also used shades). Pic via @KevinWilsonNYC Tonight: Silver Spring, MD pic.twitter.com/LAgOJV7TJd