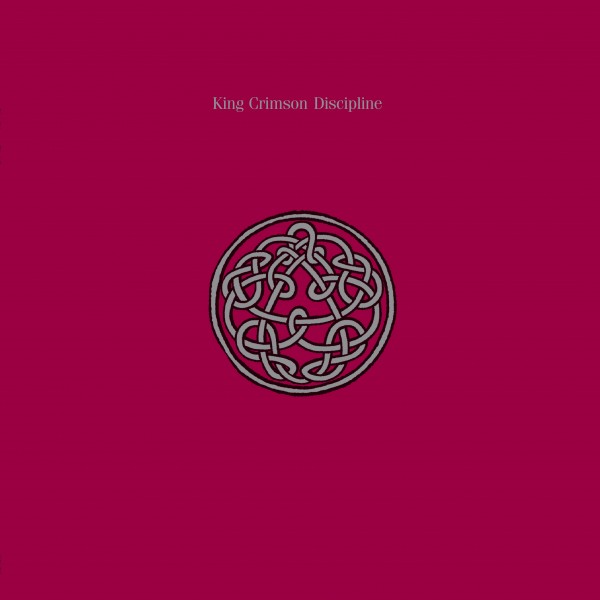 King Crimson’s 8th studio album, Discipline, is being reissued on vinyl on June 15th. Pressed on 200gram super-heavyweight for the best possible audio reproduction, it has been cut from the masters used for the 30th anniversary series overseen and approved by Robert Fripp.

When Robert Fripp declared in 1974 that King Crimson had ‘ceased to exist’ nobody could have foreseen that they would break their silence seven years later with an album that perhaps had more in common with the then current post-punk new wave than the band’s progressive rock past.

Released in 1981, Discipline, was a startling reinvention with a new line-up performing radically different material that managed to delight fans, confound critics and pick up a substantial new audience along the way.

37 years later, Discipline remains one of the key albums of the early 1980s and one of King Crimson’s most popular.

As different from the 1970s King Crimson, as the 1970s line-ups had been from the 1960s band, the new quartet of Robert Fripp, Bill Bruford, Adrian Belew (ex-Zappa, Bowie, Talking Heads) and Tony Levin (Peter Gabriel, John Lennon and hundreds of others), rapidly established itself as a force on the live circuit.

The longer songs of the 1960s and early 1970s and the extended improvisations of the live performances from the earlier touring bands were replaced with a series of mostly short, taut songs imbued with a minimalist aesthetic that featured complex interwoven guitar lines, (coined ‘rock gamelan’) Belew’s distinctive vocals, Bruford’s new armoury of electronic percussion and Levin’s fluid bass and Chapman stick lines.

Songs written for the album became firm fixtures in the band’s repertoire and the stature and influence of the material has grown over the years. Indiscipline is regularly performed in a much rearranged version by the current King Crimson line-up and the title track also made set-list appearances in last year’s US tour.

The album charted on release in many countries – including the UK and USA – while the touring schedule took the band through Europe, the US and Japan in its first year of activity. By the end of 1981 Crimson was, once again, viewed as one of rock music’s premier outfits.

King Crimson had also achieved a rare feat for a rock group – becoming one of the very few acts to release a classic album in three separate decades. From In the Court of the Crimson King in 1969, via Red in 1974 to Discipline in 1981, with differing line-ups and radically different sounds the band’s reputation for innovation and progression (in the best sense of the word) was unassailable.

In a change from other King Crimson vinyl releases, the tracklisting for the new vinyl reflects the 30th anniversary edition CD with Matte Kudasai featuring Adrian Belew’s lead guitar as track 3 side A and with the Robert Fripp lead guitar version as a bonus track at the end of side B –uncredited as per the CD. The album was cut at Loud Mastering by Jason Mitchell from audio approved by Robert Fripp.

Previous: NASA To Bring Sample From Mars Back To Earth
Next: CHVRCHES on Jimmy Fallon – The Tonight Show