FIB MUSIC: Other than the Keel reunion, what are you up to these days?

Ron Keel: The KEEL reunion has been pretty much a full time job since we made the decision to move forward, almost a year ago now. I turned over my production interest in the Vegas country show and put my previous rock band K2 on hiatus in order to focus on KEEL. It got even more intense when we decided to create a new album, because we were determined to do things right and make every aspect of this reunion special.

FIB MUSIC: Describe a typical day in the life of Ron Keel.

Ron Keel: I take each day as it comes, and try to work as hard as I can to accomplish the tasks at hand. The only time a day becomes ‘typical’ is when we’re doing shows – then you get into the grind of traveling, airports and vans and hotels, soundcheck, gig, meet & greet, partying, then start back at the top.

Right now I am deep into the vocal sessions for the new KEEL album. Those days are very ritualized in terms of how I prepare for the session – after a pot of coffee I have a tuna salad sandwich on wheat with tomatoes, and listen to the demos of the song of the day, making final adjustments to the lyrics and getting my lyric sheets organized. Each line is numbered for reference, and I highlight certain parts where I want to try harmonies. I try to do all my thinking in advance so by the time I get to the studio I can just feel it. I like to start early, by 11 AM. I’m recording the vocals at my good friend Paul Shortino’s home studio, and the vibe is great, we’re making some magic and it’s a very fun process. I’ll actually be bummed when we’re done with this record because I’m having so much fun singing and working with Paul.

After a session, there’s not much left of me. I leave it all there and exhaust myself physically, mentally, and vocally – then dinner and couch time, and a vain attempt to catch up with e-mails and phone calls that I missed while screaming my guts out all day.

FIB MUSIC: What are the last two CD’s you bought?

Ron Keel: The latest from Nickelback, “Dark Horse,” which is fucking brilliant, and “Black Ice” from AC/DC, which is also brilliant. I stopped listening to new music when I started writing new KEEL songs earlier this year, so I have a list of stuff I’m looking forward to getting when the sessions are done. A lot of people don’t realize that when your making an album, a lot of the work is constantly listening to what you’re doing, evaluating, tweaking stuff, getting inside the tunes and inside the tracks. There’s not enough of me left to listen to outside music during a phase like the one I’m in right now.

FIB MUSIC: Tell us about the Keel reunion show in Hollywood. What was it like playing live with the guys after so many years? Any highlights from the show?

Ron Keel: It felt great, an incredible rush – but there was also a lot of pressure. I’ve done thousands of shows in my lifetime, but rarely has one carried so much weight; I personally felt a huge responsibility to the other guys in the band, our loved ones and friends, our fans from all around the world who believed in us and deserved a great show. Dee Snider said it best – “A good reunion show will make you feel young; a bad reunion show will make you feel old.” Well, after that first gig in Hollywood, I felt like I was 23 again. KEEL has always been about good times and fun, good music and real attitudes and emotions, and that night was a celebration of all that.

FIB MUSIC: What was the vibe around the whole reunion? Any cool stories?

Ron Keel: I’m not blowing smoke when I say the vibe has been incredible. Everyone has the perfect perspective on this, we’ve taken care of our business properly, we get along like brothers, we communicate well, and everyone is even better musically now than we were before. The players are all even better with some maturity and experience under their belts, and I believe I have come a long way vocally as well. The whole thing is a cool story – a story about a band that has come full circle and is having the time of their lives reliving the dream.

FIB MUSIC: Any cool stories from the Southwest festival in San Antonio?

Ron Keel: Nothing unusual, unless you call getting no sleep, flights almost cancelled and the concert being delayed due to bad weather, cool. It was another day at the office for us, and we enjoyed Texas immensely despite the logistical challenges. We had played in Phoenix the night before, our flight to San Antonio was delayed, and at one time the pilot actually came on the loudspeaker and told us we might not be able to land there and we’d be diverted to Amarillo. But we made it, unfortunately everyone except the headliner (Queensryche) had to cut their show length due to the weather delay but we loved every minute of it.

FIB MUSIC: Besides M3 and Rocklahoma, what other festivals will you guys be playing?

Ron Keel: We are already starting to lock down some events for next year. I am going to the U.K. in October/November to open 9 shows for Y&T, doing my solo acoustic gig and hopefully paving the way for KEEL to return to the U.K. and Europe next year. We also have high hopes of returning to Japan. I think we proved this year that KEEL is a solid addition to any festival bill, and hopefully there will be a lot more in the future. We’re not setting any limits on this thing; we have a great new album coming out in 2010 and hope to keep rocking on the Streets Of Rock N Roll for some time to come.

FIB MUSIC: Other than the Keel reunion, what are you up to these days?

Marc Ferrari: Staying busy running a division of Universal Music Publishing called MasterSource, being a devoted Dad to my 6 year old daughter, husband to my wife and trying to put as many miles as possible on the hiking trails.

FIB MUSIC: Describe a typical day in the life of Marc Ferrari.

Marc Ferrari: Up at 6:00 am or so and then either working out or taking my daughter to school. Head to my local Starbucks for my daily jolt then to the office all day. At night I am usually writing new songs or working on keel business.

FIB MUSIC: What are the last 2 CD’s you bought?

FIB MUSIC: On the band’s website, Ron is quoted as saying he would never perform under the name Keel without Bryan, Dwain, and yourself. What does that loyalty mean to you?

Marc Ferrari: I think we all realize that the group “Keel” was special and that all our talents combined to make it what it was. Every time bands go out with less and less original members, it dilutes the legacy. 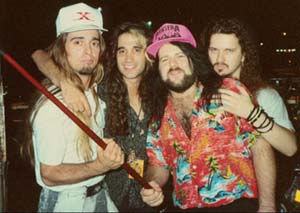 FIB MUSIC: Have you hung out with any of the Pantera boys lately?

Marc Ferrari: I actually participated in the book signing here in L.A of the Diamond Darrell book the family just released. Was great to see Vinny, Rita and their Dad, Jerry. I had lunch with Rex about 3 years ago but have not seen Phil in over a decade.

Read the entire interview on our sister site

Previous: Implementation of New Appraisal Rules Has Been a Little Rocky
Next: US Unemployment Rate Surpasses Ten Percent