Jeff Hanneman was born January 31, 1964 in Oakland, California and grew up primarily to the south in Long Beach. Hanneman was part of a family of military veterans, including his father who served during the Normandy invasion in World War II. Also having two brothers that served during Vietnam, Jeff’s family life often revolved around military history and the family’s German heritage. His upbringing also fueled his interest in Nazi medals and history, which found its way into his lyrics quite often. Hanneman wrote the band’s classic “Angel of Death,” which was about Josef Mengele, who conducted horrifying human experiments in the Nazi concentration camp Auschwitz and slaughtered tens of thousands of Jewish prisoners in the process. Nazi-themed lyrics would become a staple of Slayer’s music, occasionally leading to criticism that the band were Nazi sympathizers, claims the band always denied.

Along with Metallica, Anthrax and Megadeth, Slayer is part of the Big Four, a group of bands considered the pioneers of thrash metal music. The term Big Four is also used in reference to Slayer’s Reign In Blood, Metallica’s Master of Puppets, Anthrax’s Among the Living, and Megadeth’s Peace Sells…but Who’s Buying. All released in 1986 and 1987, these albums are considered the foundation of the thrash metal movement and commonly cited as favorites by thrash fans to this day. These bands would also get together years later for a series of “Big Four” concerts beginning in 2010. While Hanneman grew up listening to heavy metal pioneers like Black Sabbath, Judas Priest and Iron Maiden, he began to listen to punk bands like the Dead Kennedys and the Sex Pistols in high school, crediting the genre for Slayer’s fast, agressive approach to their instruments. He would later pay tribute to his punk influences by placing a DK logo and a Johnny Rotten (Sex Pistols’ frontman) portrait on his guitars. Along with bandmate guitarist Kerry King, Hanneman wrote or co-wrote nearly every song the band recorded until his death in May, 2013. Hanneman’s passing was considered a great loss to not only Slayer, but the world of thrash metal itself.

Jeff Hanneman met Kerry King in 1981, when King was auditioning for another metal band. The two guitarists hit it off immediately thanks to their similar interests in Iron Maiden and Judas Priest. The two guitarists decided to form a band, and Slayer was born. The new bandmates brought in drummer Dave Lombardo, who King had played with in a band called Quits, and recruited Tom Araya to handle bass and vocals. Slayer’s big break came in 1982 when they were invited to open for Bitch in Anaheim. Metal Blade Records founder Brian Slagel was in the audience, and asked the band to take part in his upcoming “Metal Massacre III” compilation. The band layed down the track “Aggressive Perfector” for the record, and Slagel was sufficiently pleased that he signed the band to his emerging indie label. “Aggressive Perfector” would later be included on a reissue of the band’s 1984 EP Haunting the Chapel. 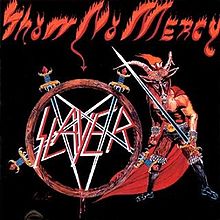 When Slayer set out to record its first album, the band was forced to self-fund the project as Metal Blade was an independent label with a very small budget. The band pulled together Araya’s savings from his job as a respiratory therapist and money borrowed from King’s father to fund the album. The band went into the studio in November 1983, and Show No Mercy was released just a few weeks later. The album generated significant buzz in the emerging thrash metal movement, selling more than 20,000 copies in the US plus another 20,000 worldwide. The band released a 3-song EP titled Haunting the Chapel in 1984, further cementing the band’s place in the emerging world of thrash metal.

1984 brought a bit of a scare for Slayer, as Kerry King was invited to become a part of Dave Mustaine’s new band Megadeth. King played with the band for five shows, but King decided to quit when Hanneman began tossing around the idea of replacing him. Hanneman and Lombardo also formed a punk band called Pap Smear that year with Suicidal Tendencies guitarist Rocky George, but abandoned the project at the urging of the band’s producer, Rick Rubin. Pap Smear was scrapped, though two of their songs would later be included on Slayer’s 1996 covers album Undisputed Attitude. Later in 1984 Slayer was invited to take part in the Combat Tour alongside Venom and Exodus. The tour is considered one of the most important events in thrash music, and helped solidify Slayer as one of the genre’s most important contributors. The band also released its first live album, Live Undead, in November of 1984. 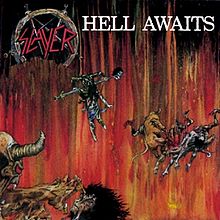 In 1985, Slayer released its second full-length album, Hell Awaits. The album received critical acclaim, and the title track became a staple of the band’s live shows. The album was well received by fans as well, and the band was named Best Band and best Live Band in a readers poll conducted by the British magazine Metal Forces. Hell Awaits also got the nod for best album in that poll, and Dave Lombardo won the vote for best drummer. Hell Awaits never charted, but was an important step in the evolution of Hanneman and King’s writing style, which many insiders say reached peak level in 1986 on the band’s 3rd album. While Hell Awaits was not commercially successful, critics took notice and the record had tremendous influence on the development of the thrash metal sound. 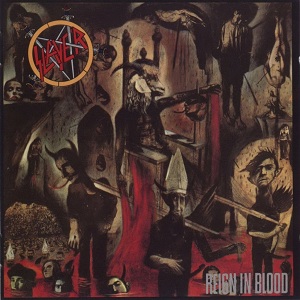 Based on the reception for Hell Awaits, producer Rick Rubin offered Slayer a contract with his new label, Def Jam Records, in late 1985. The band entered the studio and recorded Reign In Blood, considered to this day by many as the best thrash album ever. The album also generated some controversy, however, as Def Jam’s distributor Columbia Records refused to release the album due to its dark song subjects and artwork. Rubin struck a deal with Geffen Records and the album made its way into stores in October 1986. Despite being largely ignored by radio, the album reached position 94 on the Billboard 200 albums chart and was certified gold for selling 500,000 copies in the US. Reign In Blood is considered one of the great albums in thrash metal history, producing such classics “Angel of Death,” “Postmortem,” and “Raining Blood,” all written by Hanneman. These songs were all played at nearly every Slayer live gig moving forward, and “Angel of Death” and “Raining Blood” are widely considered among the best recordings ever released by a thrash artist.

Shortly after Reign In Blood was released, the band was invited to perform as the opening act for W.A.S.P.’s US tour. But just a month into the tour, Dave Lombardo decided to leave the band, citing financial difficulties. The band pressed on with the tour, bringing in Whiplash drummer Tony Scaglione to replace Lombardo. Scaglione’s tenure would be short-lived, however, as Lombardo’s wife convinced him to return to the band early the next year. Shortly after, Rubin convinced the band to record a cover version of Iron Butterfly’s “In-A-Gadda-Da-Vida” for the soundtrack to the film Less than Zero. The track garnered some much-needed radio airplay for the band, but Hanneman considered it a “poor representation” of the band’s sound.

This was not the first time Slayer’s music had featured on a movie soundtrack, as the Show No Mercy tracks “Evil Has No Boundaries,” “Tormentor” and “Die by the Sword,” along with the Haunting the Chapel classic “Captor of Sin” were included on the soundtrack for the 1986 film Rivers Edge. Well received by critics, the film was not initially successful at the box office, but would develop a cult following as it was not only Keanu Reeves’ first starring role but featured one of Crispin Glover’s best performances and was one of two films in which Dennis Hopper dances with a sex doll, Blue Velvet being the other. The film also had a draw for the growing throngs of thrash fans as the soudtrack also featured punk bands Agent Orange and The Wipers as well as Hallows Eve, an early progressive rock band with a fast, thrash-like guitar style. 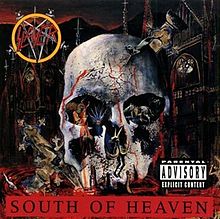 In late ’87, Slayer returned to the studio to record their fourth full-length. In an attempt to evolve their sound, they decided to slow down their tempo and use more melodic vocals. In an interview, Hanneman noted “We knew we couldn’t top Reign in Blood, so we had to slow down. We knew whatever we did was gonna be compared to that album, and I remember we actually discussed slowing down. It was weird…we?ve never done that on an album, before or since.” The result of Slayer’s attempt to evolve was South of Heaven, released in July 1988. While the album received a mixed response from fans and critics, it was the most commercially successful Slayer record yet, debuting at position 57 on the Billboard 200 albums chart. Like Reign in Blood before it, the album was certified gold by the RIAA for selling 500,000 copies in the US alone.

……one day, to be continued. 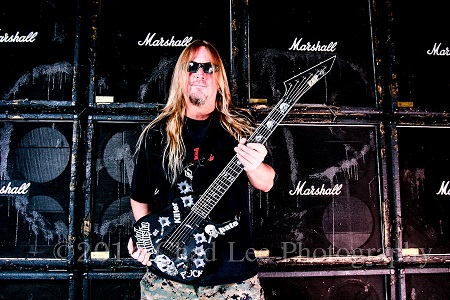 Guitars & Pickups
Jeff Hanneman’s first guitar was a factory model black Les Paul from Gibson, a guitar he would use exclusively until 1986. After the “South of Heaven” tour, Hanneman began using B.C. Rich Bich guitars emblazoned with various graphics including the Dead Kennedys’ DK logo and a portrait of Sex Pistols frontman Johnny Rotten. A couple of years later Hanneman made the switch to the BC Rich Gunslinger. Around 1990 he made the switch to a Jackson Soloist, which he would use almost exclusively until sometime in 2000. The 2000s saw Hanneman join forces with ESP Guitars to design the Jeff Hanneman Signature model based largely on his Jackson Soloist setup. Hanneman primarily used EMG pickups throughout his career, and preferred Kahler bridges and D’Addario strings.

Nearly all of the photos of Jeff Hanneman playing during Slayer’s first few years show him playing his black Les Paul, though there are a few showing him with a red Flying V guitar. He also used a custom slide shaped in the form of an upside down cross in the early days, pictured below. Perhaps the best remembered guitar from Hanneman’s later years was the ESP Hanneman Signature model emblazoned with his name over a Heineken logo, pictured above. While on tour, Hanneman typically carried six guitars with him, due to the various tuning he used on different albums. Hanneman used E-Flat tuning on most of Slayer’s albums, though a few such as “Christ Illusions” and “Diabolus In Musica” utilized alternate tuning. “Show No Mercy” was recorded in standard tuning, though most live performances of the album’s songs featured E-Flat tuning.

If you know more about what kind of gear Jeff Hanneman used, please post in the comments section below.

Previous: Tidal Launches “Discovery” Service to Support New and Independent Artists
Next: Pandora Wins Another Battle in the War Over Artist Compensation