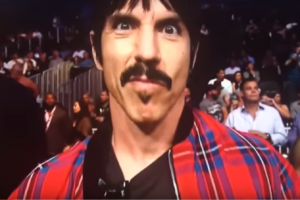 As we get older, we all learn that we just can’t do things like we used to do.  Red Hot Chili Peppers vocalist, Anthony Kiedis, tore a tendon in his ankle after “spinning around” while on stage.  In an interview with Entertainment tonight the singer insisted that it comes with the territory, “I’m always getting banged up, and hurt, and repairing, and recovering, and hurting, and it’s just normal.  At the moment, I have a torn tendon in my ankle from spinning around night after night, but it’ll heal.”

The Red Hot Chili Peppers are currently on tour supporting their 2016 album, “The Getaway”.