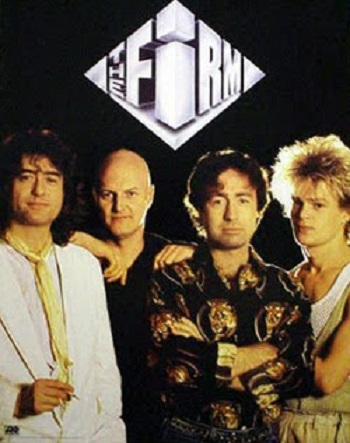 The excerpt below was taken from the full in bloom interview with The Firm / Blue Murder bassist Tony Franklin.  You can listen to the interview excerpt via the embedded YouTube clip or Soundcloud widget below.

EXCERPT DESCRIPTION:
Tony talks about the formation of his band The Firm, which also featured Jimmy Page, Paul Rodgers and Chris Slade.

The entire interview can be heard at this location, or directly on YouTube.

Tony Franklin:  The story is…that Chris Slade got a call from David Gilmour and Jimmy Page on the same day.  Gilmour called first and asked him if he wanted to do the tour, I think it would be the About Face tour in 1984, to which Chris said yes.  And then Jimmy called Chris later in the day and said, ‘hey, I’m just putting this thing together, would you like to come and have a place?’ He said, ‘oh, I would love to but I just agreed to do this tour.’ So Jimmy says, ‘oh, no worries….I’ll wait for you.’

Tony:  In the time that he was waiting, I connected with Jimmy….we connected there (while working w/ Roy Harper – Listen to the Roy Harper segment in the full in bloom interview with Tony Franklin).  So, by the time we’d done a few gigs with Jimmy and Roy and the album was done and everything, it was only a week, a couple of weeks, whatever it was after that, that Jim called me to see if I’d be interested in sitting in on the rehearsal.  I wasn’t asked to be in the band, I was asked to sit in.  They wanted to check me out and see how the vibe was.  You know, the timing was perfect. They wanted to see what it felt like with me. Paul (Rodgers) had left Jimmy to put the musicians together. You probably know that Jimmy and Paul had worked together on the Arms (Action Research into Multiple Sclerosis) Tour in ’83.

full in bloom:  Sure

Tony:  They had a good vibe and a connection. That’s where they wrote the song “Midnight Moonlight,” which ended up on The Firm album. They knew they wanted to do something, but Paul had left Jimmy to put together the players. It’s amazing, really. It was always that way, even with The Firm, it was very relaxed. It was always like, ‘hey, we just want to make a great album.’ They were very open to my input with keyboards and mixing ideas and all that stuff. It was magical, really. It felt like a real proper band….it was just very open and all about the vibe.