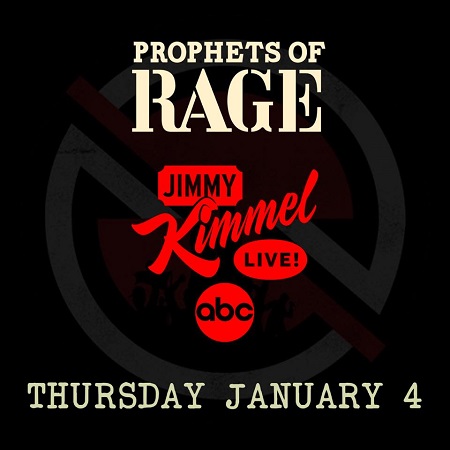 Prophets of Rage, the supergroup featuring members of Rage Against the Machine, Cypress Hill and Public Enemy, will be the featured musical guest on Jimmy Kimmel Live on Thursday, January 4, 2018.  Tune in at 11:35|10:35c on ABC. Check back, we’ll embed the performance below.

The band is currently promoting their self-titled debut album, released worldwide on September 15, 2017. The album was recorded with legendary producer Brendan O’Brien (Stone Temple Pilots, Rage Against the Machine, Red Hot Chili Peppers) and peaked at #16 in the United States on the Billboard 200.

Previous: Sammy Hagar, “”You don’t have to know what you are doing to be successful”
Next: Barrett Martin to Teach Class @ Antioch University in Seattle – Mad Season/Screaming Trees Drummer