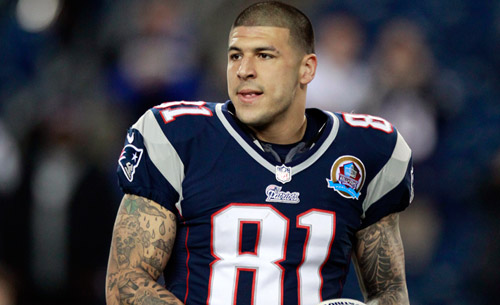 Only days after being acquitted for double murder, former New England Patriots tight end Aaron Hernandez was found dead in his prison cell, after hanging himself using a bed sheet attached to a window cell.  Hernandez was found by guards at the Souza-Baranowski Correctional Center in Shirley, Massachussetts just after 3 AM on 4/19/17. An hour later, he was pronounced dead at UMass Memorial-HealthAlliance Hospital in Leominster.

According to prison officials, Hernandez used items in his cell to attempt to block the doorway to prevent prison guards from entering. He was located in a single cell in a general population unit in the maximum security prison. At the time of this posting, no suicide note had been found.

Hernandez was visibly emotional on Friday after his acquittal for the 2012 fatal shootings of Daniel de Abreu and Safiro Furtado in Boston. However, he was still serving a life sentence without the possibility of parole for his conviction in the 2013 shooting of Odin Lloyd.

The death falls on the same day the Super Bowl winning New England Patriots will be making their visit to the White House. In 2012, Hernandez signed a 7-year, $39,582,000 contract with the New England Patriots with nearly $16 million guaranteed, and an average annual salary of $5,654,571. The Patriots terminated its contract with Hernandez soon after he was charged for the murder of Lloyd. Aaron Hernandez was 27 years old.