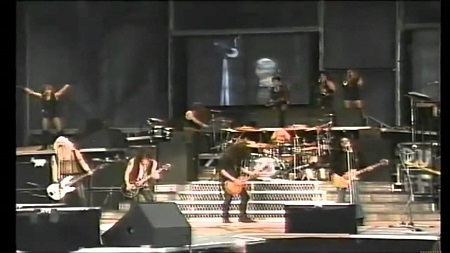 On June 6, 1992, during a Use Your Illusion Tour stop in Paris, Lenny Kravitz joined Guns N’ Roses onstage. Footage of the performance has been embedded below.

“Always on the Run” was the first single released from the 1991 Lenny Kravitz album, Mama Said. Kravitz co-wrote the tune with guitarist Slash, who had written the music for the song with the original intention of releasing it on a Guns N’ Roses studio album. It was rumored that drummer Steven Adler was having a hard time playing the song.

About the Kravitz collaboration, Slash told Rolling Stone:
“I went down to the studio where he was in L.A., and we hung out that night. He smoked pot, and I drank vodka, and we did a solo on one of his songs called “Fields of Joy.” I just finished recording another song for his new record, a song I’d originally written for Guns that never happened as a Guns song. We had a great time hanging out in New Jersey. The guy is so fucking down-to-earth. It’s a pleasure to work with somebody like that, where there’s no bullshit.”

Previous: Brooklyn Stompbox Exhibit 2017 – Sept. 9-10 – Directions – Tickets – Guitar Pedal – This Weekend
Next: David Gilmour: Watch Full Performance of “One Of These Days” from ‘Live At Pompeii’