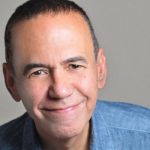 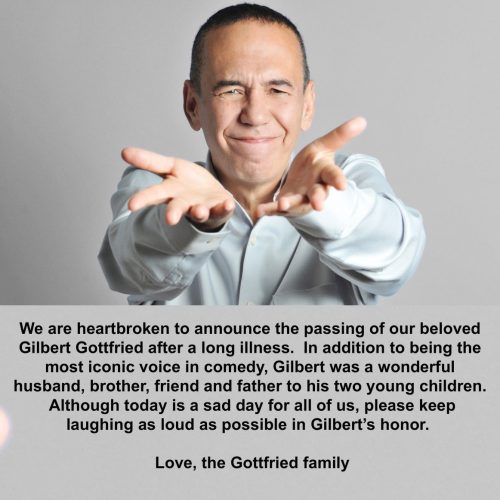 Gilbert, I don’t want to believe this. I loved him. I’m heartbroken for his beautiful family. Say it ain’t so. For almost 40 years his spectacular comedy blew me away.
You can’t be funnier. My God, all who experienced him are crushed. Say it ain’t so.🙏♥️ https://t.co/pO3HW36ta7

Gilbert Gottfried made me laugh at times when laughter did not come easily. What a gift. I did not know him well but I loved what he shared with me. My best wishes and sympathy to his family. #ripGilbertGottfried

I don’t think I ever laughed as hard as I did sitting on a flight to LA across from Gilbert once in the early 90’s.He would do something funny and not stop till you stopped laughing. God he was funny. So funny.

Sending love to his family. #RipGilbertGottfreid

Sad to hear of the passing of the groundbreaking and legendary Gilbert Gottfried. Here was the last time I saw you in Miami. My condolences to the family and friends of this genius comic, artist, and provocateur. Comedy mourns tonight. #comedy 🙏 🙏 🙏 pic.twitter.com/F3oIp81lmy

I saw Gilbert perform in 1985 and when he entered to applause he said, “Thank you, thank you very much.” He then continued to say “thank you” repeatedly for ten full minutes. It was the nerviest, funniest thing I had seen. So sorry to lose this sweet and delightfully funny man.

Sorry to be a downer, but today’s just a terrible day (as great as things have been with tour etc). Woke up to hear of NYC subway shooting, things worse than ever in #Ukraine and now THIS?Some found him annoying (which I’m sure he appreciated) I’ll miss him #RIP #gilbertgottfried pic.twitter.com/Oi3tf2Bs3Z

RIP Gilbert. Opening for Gilbert Gottfried at Carolines and Princeton Catch was one of the great thrills of my early stand up life. He could leave you gasping for breath…just indescribably unusually hilarious…Damn.

Absolutely gutted to hear about my friend Gilbert. One of the funniest guys ever. An enormous loss to the world of comedy. Much love to his friends and family.

One of a million crazy-funny Gilbert memories is when he made a deranged caller to the @HowardStern show repeat a LONG story 15 times, each time pretending he couldn’t hear what he said.