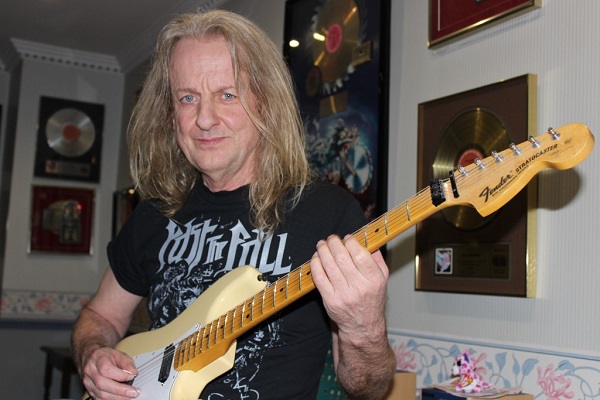 After what was meant to be a one-off live performance in November, K.K. Downing has been in the studio, working on the next chapter of his career. After receiving offers from multiple labels and management companies, Downing met with Paul Woolnough, CEO of Explorer1 Music Group and the creator of its innovative business model, and they agreed to partner and work together in all aspects of K.K.’s career.

“I am very much looking forward to my partnership and future with Explorer 1” said K.K. Downing. “The reason I chose Explorer1 to manage my future over many other bona fide companies is their extensive roster of so many familiar and qualified experts and veterans of the industry that is surely incomparable. Also their exciting and innovative business model is something that I truly believe will become the future industry standard, making Explorer1 leaders not followers in the music and entertainment industry”.

Joining Explorer1 Music Group is management veteran Andy Gould who will take on the role as Principle Manager for K.K. Downing. Gould had successfully managed Rob Zombie during his solo career as well as his days in White Zombie with a track record that includes sales exceeding fifteen million worldwide and seven GRAMMY® nominations with Zombie including securing deals for Zombie to become one of only a handful of people to have unprecedented success for six feature films as the writer and director. Gould has also co-managed such acts as Linkin Park (with Rob McDermott), Pantera (with Walter O’Brien) and Guns N’ Roses (with Irving Azoff).

“Having been in the hard rock and metal music management business for over four decades, I jumped at the chance to join the Explorer1 team and its innovative artist partnership model” says Andy Gould. “I have been a huge admirer of K.K. Downing’s work throughout his career, from listening to those early ground-breaking albums to watching him every night when Judas Priest had Pantera open for them,” Gould continues, “and with this new partnership I look forward to representing the next chapter in the K.K. Downing legacy.”

“After first seeing Judas Priest at Birmingham Odeon as a teenage fan, I was always inspired by their innovative style, stage shows, and larger than life personas” said Paul Woolnough, Explorer1 Music Group’s CEO. “When we met I was impressed with his drive and vision to create this new chapter in his already incredible career, and I am so proud he chose Explorer1 to be his partner in what will be an amazing journey into the past and future of one of rock music’s true icons”.

K.K. Downing’s genre-defining guitar style helped establish Judas Priest‘s iconic sound and helped propelled them to one of the top Heavy Metal bands of all-time, earning numerous accolades including a GRAMMY® in 2010 for “Best Metal Performance,” a total of five GRAMMY® nominations and multi-platinum and gold releases.

If you haven’t already, make sure to listen to our full in bloom interview with K.K. Downing @ this location.